GameFace : The new VR Headset no one has heard of

GameFace : The new VR Headset no one has heard of 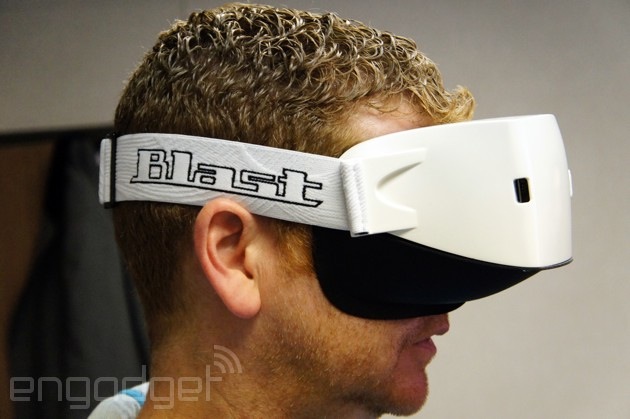 the current prototype is 1,920 x 1,080 pixels, AND has Positional Tracking with No Webcam or external thingy of any kind!! And NO Wires!
Currently uses Tridef & Android

To tell the truth, this actually seems pretty sweet - the only downside seems to be the software side (Android only for now) - Oculus has released all of the plugins for Unity3D, Cryengine, UDK so it has a lot more native content (actually this has zero native content as it's all Trideffed)
Oculus Rift / 3d Sucks - 2D FTW!!!
Top

Re: GameFace : The new VR Headset no one has heard of

I had an opportunity to try GAMEFACE last year , at i49 the rep was also demoing the Rift . The version of GAMEFACE that point had screen door issues as well as visible pixels as does any 1080p "phone" screen based FOV2GO iteration. Head tracking worked fine .. the demo was looking around (no movement control at that point) a quake like castle with flickering torches on the walls.. though I did point out before the rep showed me , that what he what he was going to show me was a phone with Rift lenses ..holding up my S4 to show him .. this is a standard FOV2GO design .. They talked of using streaming to play games, but using a proprietary streaming mechanism.. this would still require tethering to a PC or cloud ... I could have shown him how to stream Rift and PC content to it.. but again that requires tethering over wifi to a PC ..

But we can do that on any device these days ..

The FOV2GO derived branch of HMDs are at their core phone screens with magni-ski-goggles .. from the original to the Rift(s) to the hallowed Valve prototype ..with tacked on "ecosystems" It was inevitable that the common person would catch on and develop their own .. Gameface is just one of many ..

I have seen increasing numbers of FOV2GO likes at shows , Eurogamer was buzzing with people hovering around the Omni Virtuix stand where they were using the Rift .. these people were wearing their own phone/FOV2GO designs .. it was strange ...like little DIY VR guppies swimming around the Rift shark..

If you want to make your own .. and probably better version (depending on your phone) you maybe interested in the vrAse https://www.kickstarter.com/projects/20 ... ality-case


and no I do not work for vrAse, every time I post an comment on MTBS3D or on a HMD , I get accused ...or I think politely asked ..by someone who turns out usually to be working for OVR .. if I work for the company I commented on! ..

honestly all these FOV2GO likes .. things like GameFace were happening at a time when few had access to a 3D printer ..to print a FOV2GO case and the notion strap on the magni ski mask goggle array ( that claims to create VR) ..was news.. .. now though we are seeing increasing numbers of these "cases" entering the market .

it is only a short matter of time before the Shenzen massive catch on and you start picking these up in mobile phone shops or even one day in your local Apple Temple .. Very shortly we will have VR cases for phones costing $30 ... now that is going to change the whole HMD picture ..

And that competition will be beneficial to consumers and even OVR ... but this is something the promo trolls will have a hard time swallowing .. as you will see from the responses to my comment ....