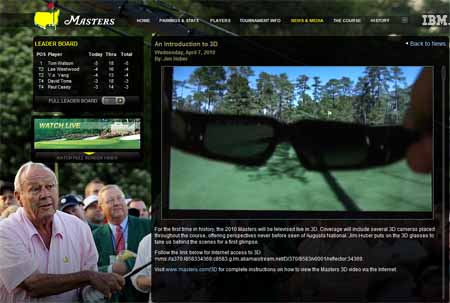 Now that 3D hardware is here, the content is starting to follow. But is it compelling enough to convince consumers to upgrade?

There are two ways to view 3D content, not counting your local cinema. The first is with a computer equipped with the right hardware and software. For the past several weeks, I’ve been testing Nvidia’s 3D Vision technology using a desktop PC and one of the new full HD monitors with the required 120Hz refresh rate. The other way to get 3D–and the way most people will–is with one of the 3D TVs from Panasonic, Samsung or Sony. (I’ve had a chance to try out a Samsung 46-inch 3D LCD TV with a 3D Blu-ray player, but that’s for a separate post.)

The box office success of Avatar and Monsters vs Aliens has kindled interest in 3D, but to date there hasn’t been a whole lot to watch at home. That’s finally changing. Sports is regarded as one of the “killer apps” for 3D TV and this week parts of The Masters golf tournament will be broadcast in 3D. This isn’t first 3D sports broadcast–Cablevision staked claim to that with a March 24 broadcast of the Rangers vs. Islanders game–but it is the first that will be widely available. Cablevision, Comcast, Cox and Time Warner will all be showing some golf in 3D. In addition, IBM is streaming several hours of 3D coverage each afternoon from The Masters Web site.