By NeilJanuary 19, 2009Newswires
No Comments 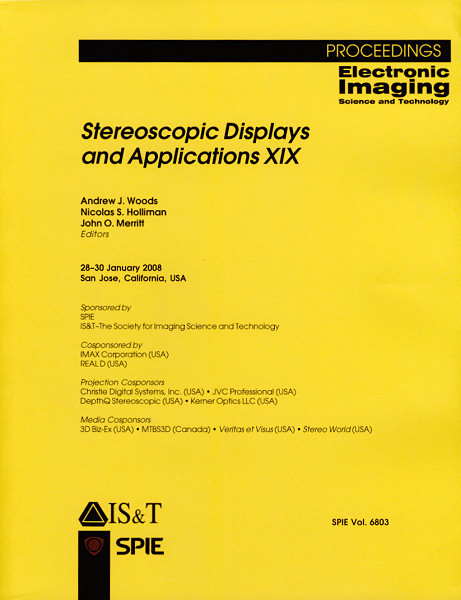 Today January 19-21 sees the opening of the above events in San Jose (CA). It is the oldest and largest event dedicated to state-of-the-art 3D in the Americas-Asia area. “Centered on research, the SD&A unites laboratories, universities and R&D units from all over the world. Each year, these scientific communities come to present their work and exchange with their peers around a conference cycle and an exhibition area. “
“This year’s subjects include: display and autostereoscopy 3D cinema 3D TV volumetric displays 2D/3D conversion 3D cameras human perception”

This year “Dimension 3 expo, the International 3D Stereo Forum, “has chosen to support the Stereoscopic Displays & Applications event, on the occasion of its twentieth edition“. the Dimension 3 expo is itself “the international forum on 3D stereoscopic images organized by Avance Rapide Communication. Screenings, Conferences and Exhibition. Dimension 3 is held from June 2 to 4, 2009, at the Centre National de la Danse in Pantin (near Paris)”.

As we know Neil will be attending and actively involved so we look forward to his summary on his return.