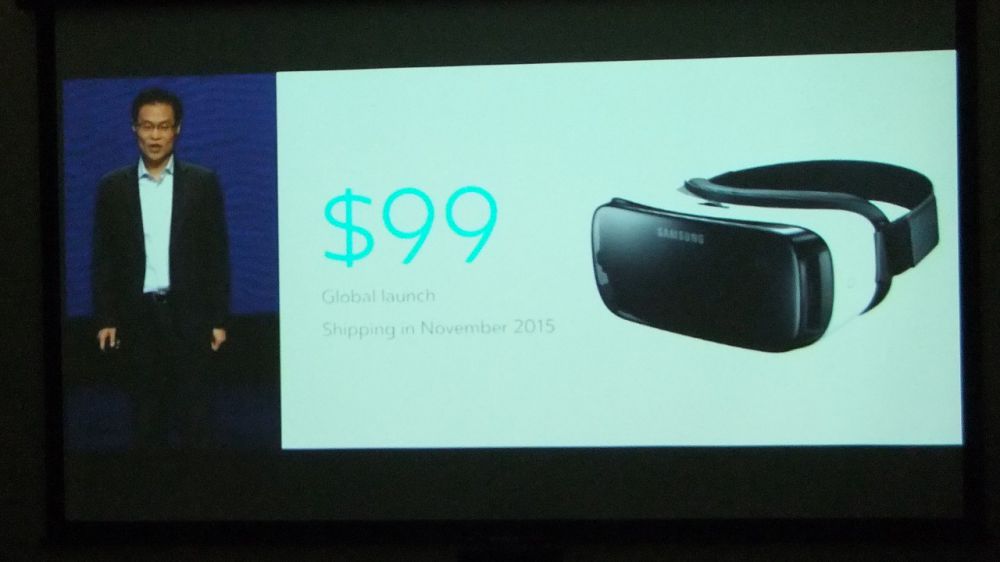 Today was keynote day at Oculus Connect 2!  Oculus went out strong with an updated Samsung Gear VR with an American launch ready for Black Friday. It’s no longer locked down to a single Samsung smartphone and is now designed to work on all their flagship phones including the Galaxy Note 5, Galaxy S6 Edge+, Galaxy S6, and Galaxy S6 Edge. However, this is all minor stuff compared to their price point: $99 US; practically near cost. This is great for early adopters, though it also tells us where Oculus and Samsung have hedged their bets. If the money is not being made from the hardware, it has to come from the content.

This new pricing model is likely a big gamble that will require content exclusives that are only possible with expensive marketing deals. If not through marketing deals, Samsung & Oculus will have to make every effort to keep their content makers happy…forever…because they will be dependent on every relationship. It will be interesting to see how Google reacts. Now that both Oculus and Google Cardboard are inside that $99 figure, it wouldn’t surprise me to see Google pursuing a wider scale SDK and hardware spec that is more conducive to effective mobile VR. That $99 starters pistol means they are both fighting for content and marketing dollars instead of the divided world of hardware premiums and advertising up-sells. We’ll see.

Congratulations to NextVR for getting the 360-degree broadcasting rights for Oculus Connect. Oculus was more dismissive of 360 content before, so maybe this is a sign of things to come. It’s definitely a mixed message to promote 2D movies in VR because their virtual movie theater isn’t the same as the real thing (though still a blast).  I’m confident that their Netflix deal and that of other content suppliers is just laying down a flagpole for 360-degree content to come.

On the PC gaming side, Oculus did a smart thing by joining forces with AMD and Nvidia to brand what qualifies as Oculus Ready or what is powerful enough to effectively drive their VR hardware. It would be better to see something developed independent of Oculus and non-proprietary, but at least they have the right idea. Thinking back at the stereoscopic 3D days and how little meaning these stamps of approval ultimately had, I’m hopeful the marketing and quality assurance teams will take my advice and stay on opposite ends of the building.

Oculus highlighted a desire to get more metaverse involvement, and they used this to link to the eventual release of Minecraft for Oculus. This is kind of an inside joke because when Oculus was acquired by Facebook, the then owner of Mojang Games, Markus Persson, refused to support Oculus through VR for ethical reasons. Fortunately, their acquisition my Microsoft valued at a couple billion dollars helped overcome these concerns. 🙂

Finally, as enthusiastic as Mike Abrash is about current virtual reality, he was quick to point out that there is so much more to learn over the course of four to ten years. Mimicking the entrepreneur’s mindset of failure being a prerequisite for success, he exemplified the Oculus Research methodology of exploring each potential solution until they find a logical and positive conclusion. However, the remark that resonated most was an acknowledgement that “These Are the Good Old Days” for virtual reality. So…here we are.