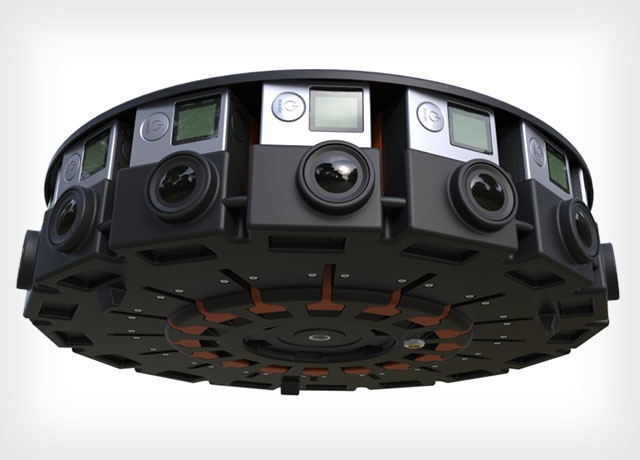 While Google has been highlighting their slightly bigger Cardboard frame which expands the physical compatibility of their solution, the real innovation is their up and coming Jump platform.

Jump is Google’s ecosystem for 360-degree 3D VR content creation and distribution. First is the Jump array which is designed for GoPro cameras, but can actually seat other brands and manufacturers. GoPro is still recommended though because of special optimizations. The cameras themselves are not stereoscopic 3D, but with some fancy math, Google is able to extrapolate a left and right view from the 360-degree source material. There is at least one account that there is additional flexibility to change perspective as you are in the VR experience compared to other solutions. We saw something similar at FMX 2015 (and weren’t permitted to interview about this!), and there is clearly a lot of math involved. If it’s the same thing or concept, it definitely works!

Next is “the assembler”. It’s stitching software that takes the source material from the sixteen cameras on the array and creates the 360-degree 3D experience. Google is sharing this software for free which means the processing (likely lots of processing!) will be handled by the content makers.

Finally, there is YouTube. YouTube doesn’t yet support stereoscopic 3D with 360 videos, but Google has plans to introduce this functionality this summer.

This looks like it’s going to be a lot of fun!