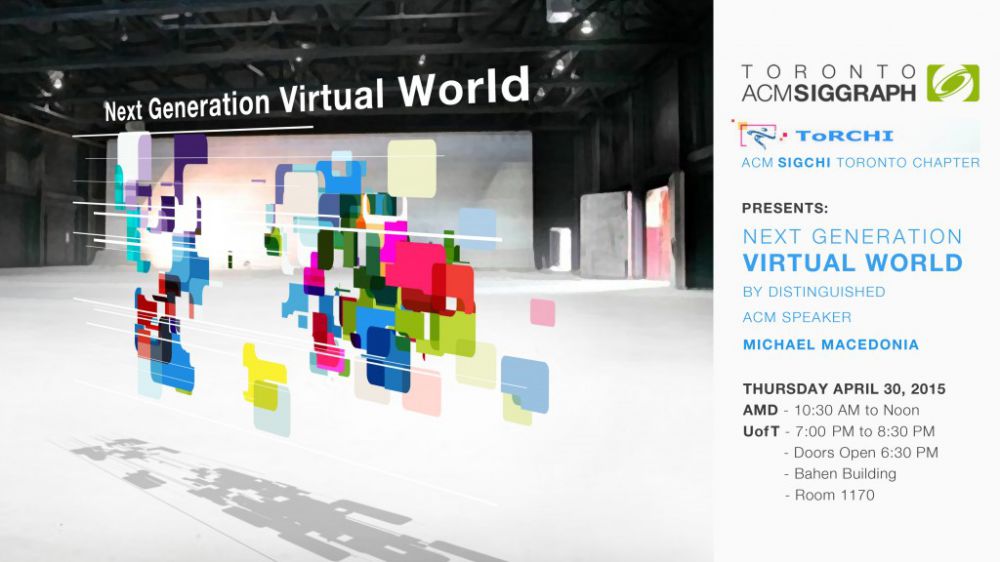 It’s extra cool when something major happens right in your backyard!  Put together by the Toronto SIGGRAPH chapter and sponsored in part by AMD and the University of Toronto, Next Generation Virtual World will feature none other than Dr. Michael Macedonia.  Tickets are just $15 plus applicable fees and taxes.
These details were sourced from the website:

Dr. Macedonia is a computer scientist and an expert on virtual environments, computer games, and military simulation. His prolific and distinguished career includes highlights such as serving as the Director of the Disruptive Technology Office (now IARPA) for the Office of the Director of National Intelligence in the United States, and as a contributing editor for the IEEE Computer Graphics and Applications. Dr. Macedonia was responsible for developing the technology strategy for the U.S. Army’s lead training and simulation system development organization. He also led the Army’s effort to develop the Institute for Creative Technologies at the University of Southern California, and promoted the adoption of advanced commercial game technology for simulation and education. He currently serves as the Assistant Vice President for Research and Innovation at the University of Central Florida.

Mike will cover the challenges and research issues for large scale, persistent virtual worlds in the 21st century. After nearly fifteen years, virtual worlds are on the verge of demonstrating their disruptive potential, as they are enabling new innovations in business models that go far beyond entertainment and into diverse fields such as medicine, national security, diplomacy, learning, and psychology. However, these innovations are bringing about new demands and requirements for virtual world technologies, features, and policies. Whatever the challenges, virtual worlds now offer a new medium for making computing more tangible and collaboration more powerful.

Looking forward to seeing you all there!  Dr. Macedonia will be giving separate talks at AMD’s offices in Markham, Ontario on the morning of April 30, 2015, and at the University of Toronto on the evening of the same day.