Alongside Doom and Quake, games like Wing Commander and Descent were the staples that cemented the future of the mind blowing video games we take for granted today.

Descent is back! Pilot your ship and battle foes through twisting, turning tunnels with unrestricted 3D movement & FPS action in Zero-G! Descent: Underground is a completely re-imagined version of the original featuring new environments, breathtaking graphics, and…virtual reality. Similar to the way Descent was required gaming in the 90’s, Descent: Underground could very well be the stuff of legend.

There is just over a day left before their Kickstarter campaign finishes, and they’ve raised over $450,000 of their $600,000 goal. We’d really like to see this vision become a reality! 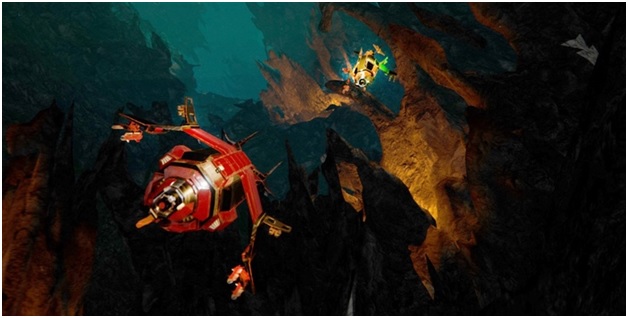 Descent: Underground will have full VR head mounted display support, and the developers already have the game running with the Oculus Rift with independent ship movement and head tracking – so you can fly the ship in one direction while looking in another direction within the cockpit. There could be some serious VR presence with this game!

“We chose Unreal Engine 4 as the engine for the project in part because of its support for VR,” says Jason Spangler, CTO at Descendent Studios. Spangler says the game is perfect for VR, being a first-person spaceship shooter with precision flying in any direction – forward, back, left, right, AND up and down – through completely 3D terrain and mazes in both single-player and multi-player gameplay. Spangler believes that due to VR’s better situational awareness, pilots with VR headsets will likely have an advantage over those who don’t.

“It stretches the mind navigating the full 3D maps using all three dimensions fully, not just mostly-flat maps like most shooters,” he says, “reminding me of the Battle Room game in Ender’s Game.”