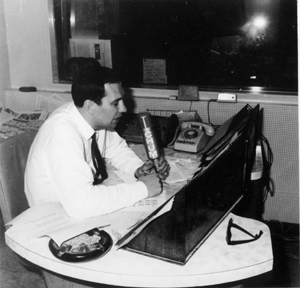 This has nothing to do with VR or immersive technology.  On the flight over to Vegas, I got the chance to sit next to Duff Roman.  His bio doesn’t give him enough credit.  Among other things (a lot of things), he’s basically the guy who brought a first-of-its kind Rolling Stones concert to Toronto in 1977; a secret “on the down low” Rolling Stones concert that everyone knew about!

Maybe we’ll catch up with him later, and he can share the story again.

Why was he flying to CES?  He is currently serving as Executive Vice-President for a company called e-Radio.  The idea is that through the power of FM radio, it’s possible to instruct all the appliances in a given radius when it’s the best time of the day to operate to save money.  It’s a world-changing opportunity for consumers looking to save on their energy costs, and it could represent a major paradigm shift for energy and equipment suppliers as well.  It’s for these reasons that E-Radio is winning a CES 2015 Innovation Award.

We know a lot of sites will be putting a lot of focus on immersive tech, and its good to see that the industry is Starting To All Nurture Developments And Realizing Diverse Success.  See you all at CES 2015!