The Ramifications of the Dimension Technologies Inc. Kickstarter 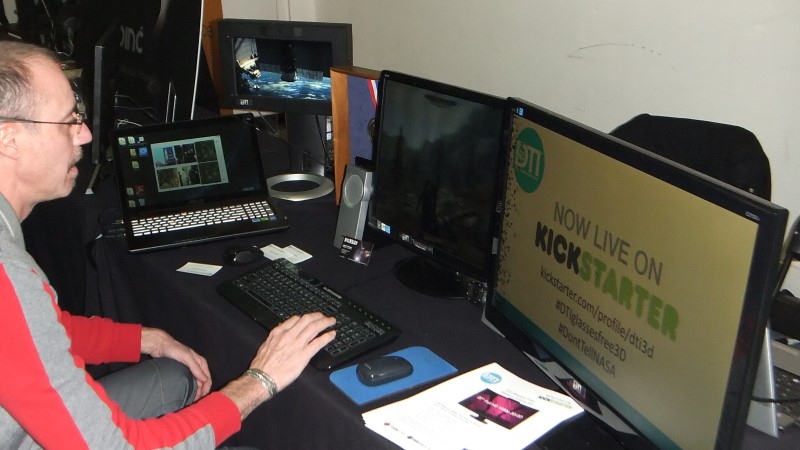 Too often, 3D glasses have been credited as the major handicap for 3D content such as games, movies, and broadcast for being as successful as they could be. Up until now, glasses-free 3D meant losing resolution, rampant ghosting, required sweet-spot viewing, single viewer limitations, proprietary formats, and who knows what else.

The Immersed conference was a huge success and marked the beginning of new immersive technology stories. One of those stories was the launch of the Dimension Technologies Inc. (DTI) 27″ glasses-free 3D monitor Kickstarter. Jointly with NASA, Dimension Technologies Inc. has been actively prototyping what promises to be the ultimate glasses-free stereoscopic 3D display. Clear 3D without the trade-offs and glasses.

The ramifications of this are huge. Yes, 3D video games stand to benefit for sure. However, this is also a golden opportunity for all 3D content makers that need instant viewing capability of their material. 3D filmmakers, serious use cases that need a stereoscopic 3D interface, marketers looking for impressive ways to show their content without glasses – the opportunities are endless.  I’m even wondering if this were combined with the right software support, if this could help VR content makers preview certain things without wearing their HMD.  If DTI can achieve 70% – 80% of their promise, we are looking at the rebirth of modern 3D and its related interest.

I’ve read gamer criticisms that a 27″ display at 1080P is a somewhat low resolution compared to the 4K panels becoming readily available today. Keep in mind that true 3D rendering requires almost double the processing power, and we can barely effectively render 4K in 2D let alone in 3D! To push a bigger spec would have been counter-productive. Also, the benefits of 4K are less than clear until the user is working with a far bigger display. The DTI3D monitor isn’t a single product innovation; this could represent a new method for all kinds of displays and specifications in the not too distant future. This is a novel beginning much like the pixelated Oculus Rift DK1 was an early beginning; though I expect their Kickstarter outcome will be more finalized from a consumer point of view.

Due to limited resources, I’ve only supported three Kickstarters to date. I backed the Oculus Rift DK1, the Sixense STEM, and now the DTI 3D 27″ glasses-free display. The Rift was backed because it was born here and we support our own. I thought it was super cool, and if successful, I knew this was going to open up a new industry. Sixense was backed because I saw the potential and I knew other products would be dependent on it; I look forward to eventual delivery. I’m backing DTI because…I want one.  If they could achieve 70% – 80% of their vision, it will be remarkable; and similar to the Rift, it’s a bit of history I’m proud to be part of. I really think DTI should have the opportunity to make this work as others will follow with similarly novel ideas and implementations in the 3D world.  This is how industries begin, and I want to see it happen!

Happy American Thanksgiving everyone, and good luck to the DTI team!