A Special Thanks For Immersed

A Letter From Neil Schneider: 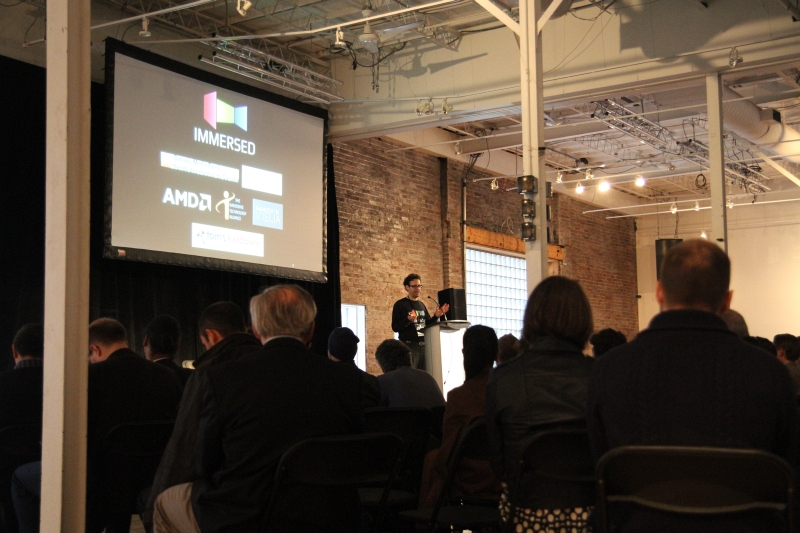 It’s the first day after Immersed, and all I can say is the event was absolutely amazing! It was a full house of the top people in the immersive technology industry. Virtual reality, augmented reality, stereoscopic 3D, gesture technology, and more.
The mindset of this conference was to build an industry. The market was there, the investment community was there, the government was there, the media was there – we even had a successful public exhibition.
People flew in from all over the world. China, Korea, Ireland, Engliand, France, Brazil, the United States, and of course other parts of Canada. Every panel and keynote had its place. Technology, content, games, film, business building, immersive philosophy and responsibility – everything was covered.
Of course, everything that could go wrong went wrong. The internet was out, we had a very late start, display cables were missing for our keynote presenter, extra electricity had to be unexpectedly shipped in on a Sunday, and many were running on only a few hours of sleep. Nobody cared. The exhibit hall was filled to capacity with 25 exhibits, the audience counts only divided when they had to decide between training and sessions, and everyone was networking and building. By the time the bar opened, everyone was drinking and having a good laugh; excitedly talking about what was going to happen on day two.
The sheer love for immersive technology and the confidence that this market can stand on its own two feet was deafening. The world’s top talent, future thinkers, and visionaries of what’s to come worked through example. There were no “luminaries”, egos, or politics of who can sit and talk with who. Just the world’s best working and networking together as kindred spirits building something far bigger than themselves.
Case in point, one of our speakers (tops in his field) was nervous about sitting with another on the same panel because he wasn’t familiar with his work and didn’t know what to expect. They met for the first time on stage, their chemistry was obvious, and a new friendship was born! This is Immersed. The technology may be the platform, but it’s the stories and the industry building that’s the true measure of success – and we did it. More importantly, we will do it again in 2015 and again in 2016 and again in 2017 and onward and upward. It’s not up to us now, it just is.
We’ve put on a brave face, but putting Immersed together was a great struggle – both professionally and personally. Between tuning out the vocal naysayers, maxing out our credit cards, charting unexplored territory to the last minute, and creatively getting the word out on short notice, this was exceedingly difficult. It was during this critical time that the industry leaders came forward. Wiring money in from overseas, following us on Twitter, agreeing to exhibit on short notice, inviting me to speak at local Meetup groups to drum up interest, or even just patting me on the back as true mentors and keeping me sane.
I very much want to thank some special people and organizations that helped make Immersed possible. 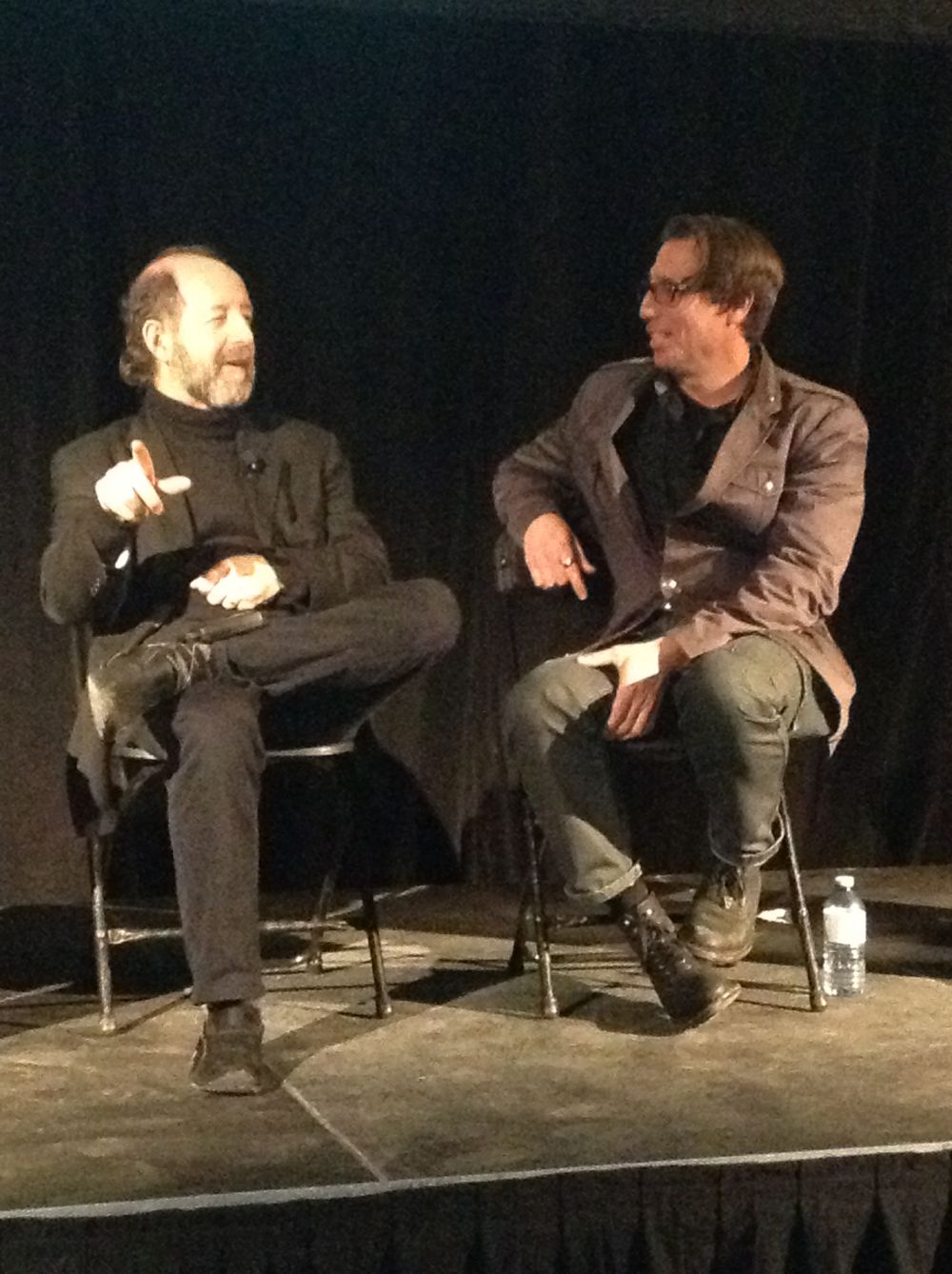 I had some tremendous mentors. John Gaeta (pictured left, right) has been a true friend. Not just a visionary (he hates being called that), he really came through in bringing a big picture element to the conference. More importantly, he risked putting his name on this conference in writing. The same goes for David Traub (pictured left,left) from Epiphany Film Fund, and CG artist for The Lawnmower Man.
Cubicle Ninjas and Proforma did all the creative and printing. That polished look that the delegates enjoyed at the conference as well as online through the getimmersed.com website is all credited to them. Guys, you really helped make this possible.
Carol Warren and her team from Crew Communications did all the press leading up to this event. We’ve worked with Crew Communications since MTBS first started, and I consider Carol one of the most important relationships I have. This conference would have been impossible without her input and ideas.
Jaye Block and the AMD team were true industry supporters. Everyone knows that AMD is keeping their industry stature with limited resources and the strongest wits, and it’s a true mark of leadership that they were premier sponsors of Immersed when those resources could have easily been spent elsewhere. True industry leaders; we won’t forget it. 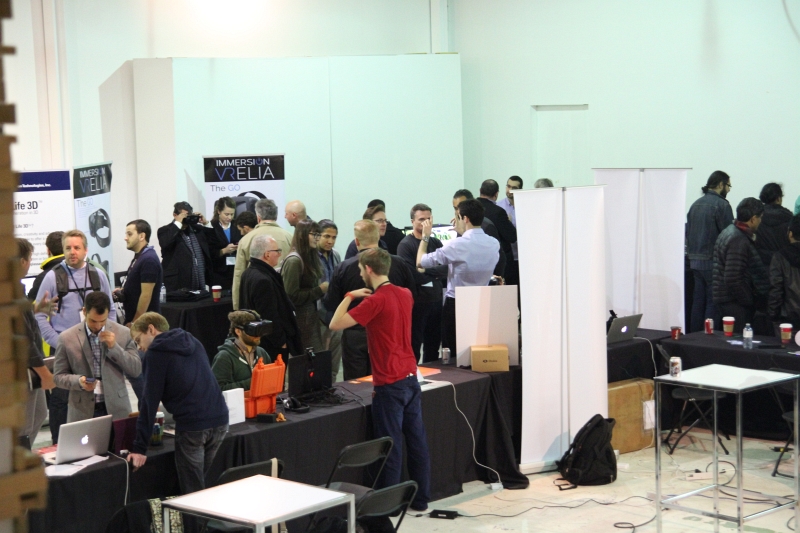 The same goes for Manuel Gutierrez and the ImmersiON-VRelia team. I’ve known them since 2007; at the roots of modern 3D. They are truly excited about VR and immersive technology, and for them to take on a Premier Sponsorship and wire the money over sight-unseen is both a mark of industry confidence and a worthy relationship by helping us out in a time of need.
Ana Serrano and the Canadian Film Centre team were true backers of Immersed. From bringing the Body/Mind/Change David Cronenberg VR experience to Immersed to helping promote the #$@(*& out of this conference, their involvement was invaluable. 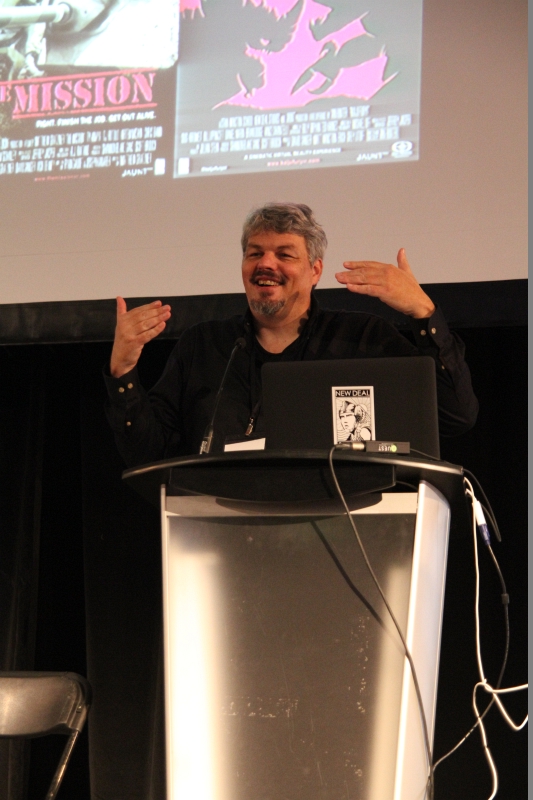 Jaunt and New Deal Studios were also tremendous contributors to Immersed. We were honored to host the debut of Paul McCartney in concert on the Oculus Rift, and Ian Hunter’s keynote (pictured right) was a huge hit. People were constantly talking about the level of speakers we brought to Immersed, and Ian’s down to earth nature exemplified it.
I’d also like to thank Max Berdowski. Max is the king when it comes to understanding government funding, and he raised the first seed capital from Canada Media Fund and the Ontario Centres of Excellence, our Founding Partners. You can’t just show up at their door and ask for a cheque; you need to understand how these departments work and the process to follow. Max is also tenured at putting events like this together, so it was very helpful to get his input on a regular basis. Thank you, Max!
James Stewart runs Geneva Film Company and is the Toronto chapter head of the Canadian 3D & Advanced Imaging Society. In addition to being a great mentor, John reached out to Canada’s film industry to get them to Immersed (because they HAD to be there). Thanks James!
Equal thanks go out to Dr. Jon Peddie from Jon Peddie Research and Neil Trevett from The Khronos Group and Nvidia. They helped promote Immersed through their channels, and they continue to be personal mentors. Thank you guys! Kudos also go out to David Coombes and James Dolan from Nvidia! 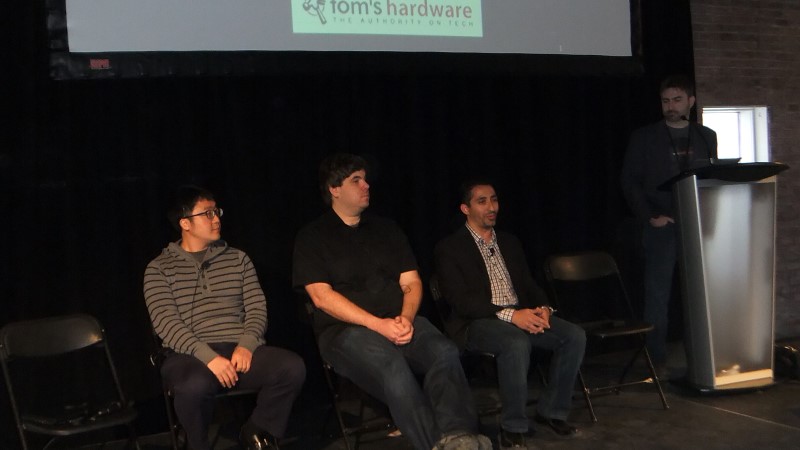 Everyone who reads Tom’s Hardware does so with good reason. They are the best, and we are eternally grateful to Fritz Nelson, Seth Colaner, and Don Woligroski for writing about Immersed and coming down to the show. Could you imagine AMD, Nvidia, and Silicon Arts on the same panel?!? AMD and Nvidia sitting right next to each other! Only at Immersed this could happen – and it did. True industry leaders.
Of course, I have to mention Martin Lord from the Ontario Centres of Excellence. With one phone call, Martin changed my career for the better in 2011 by really opening up some doors and giving me the opportunity to work at a much higher level amongst the industry and working to do great things for the industry at large. To have his confidence means a lot to me. Martin, you’re the best!
Jason Jerald from Nextgen Interactions was my rock. In addition to having his ear at a moment’s notice, he called his best friends and most senior contacts to get them down to Immersed. If one door closed, he worked to get another open. He’s a true friend, not just to me, but the industry at large. The world is a better place with him in it.
The magic of Immersed didn’t just happen. We had hard working volunteers: Andrei Petrov, Jeff Lee, Brandan Sorocpia, Pawel Rajszel, and Ante Bralic. Imagine our horror when we arrived at the venue at 7AM, and the tables and chairs weren’t set up. Guess who did it? Guess who got the delegates from one room to the next to start sessions? Guess who distributed the hundreds of feet of electrical cabling to all the exhibitors? Guess who kept things in check while I was on stage or putting out other fires? These were the miracle workers. 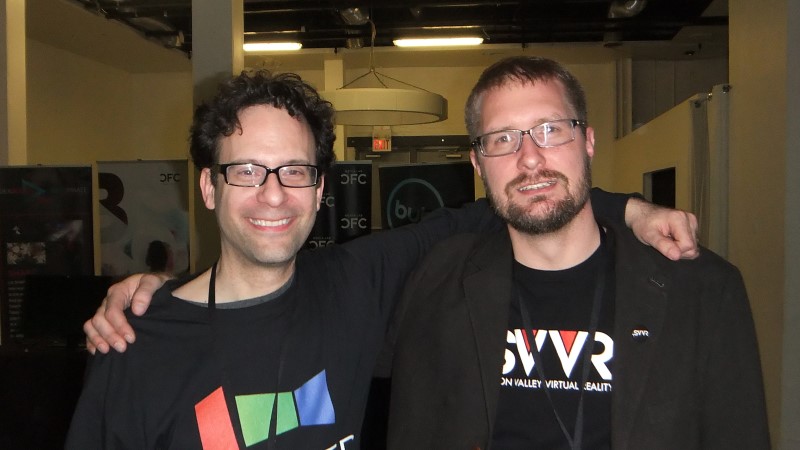 Speaking of miracle workers, I want to thank Karl Krantz and Nana Usui for coming in from SVVR. While this was our first show, they do it on a regular basis via their regular Bay-area Meetups and of course their SVVR Conference. Immersed wouldn’t have been complete without Karl speaking and sharing his stories, and we will definitely do it again. Thank you Karl!
Stephan Tanguay, the organizer of Toronto VR Meetup, and Jacky Bibliowicz, the Head of SIGGRAPH Toronto really rallied the troops to get people down to Immersed. The same goes for Kevin Williams and the DNA Association for helping promote the show.  Boston VR was a huge help too.  Guys! You were great, and you really helped us when we needed you most.

I can’t believe I almost forgot about Blair Renaud from IRIS VR!  He helped promote Immersed through his social channels (as did Worldviz, and several sponsors and speakers).  More importantly, he tolerated my regular Skype pings (“Blair!  You there?”).  Anyone who knows me on Skype gets the joke. 😉 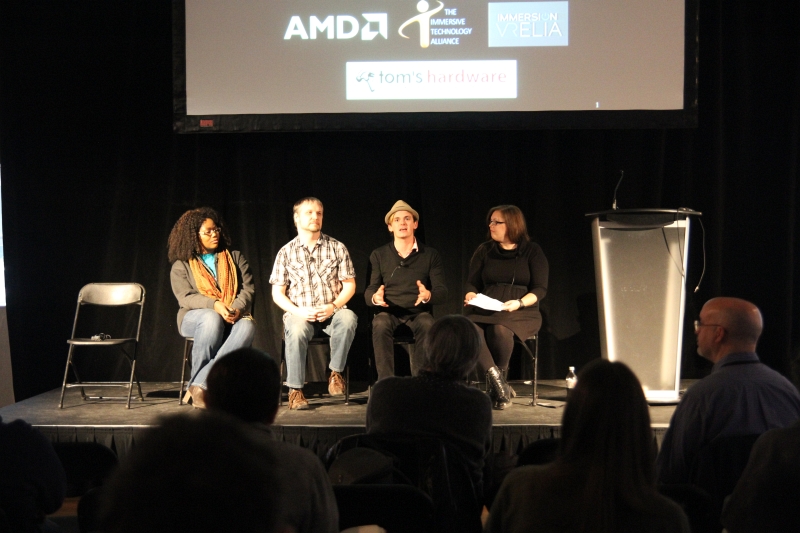 Chris Collins and Joyce Bettencourt deserve full Kudos as well from Avacon. Chris, you did an awesome Metaverse panel; it means a lot that you flew in special to make this happen alongside Mary Spio from Next Galaxy, Jesse Joudrey from Jespionage, and Ben Miller from Wemo Lab.
Finally, we’d like to thank the Immersive Technology Alliance for having our back with this. Immersed was as risky as it was ambitious, and it paid off. It never would have happened without the approval and blessing from Alan Price, John Merrit, Mark Fihn, Habib Zargarpour, John Gaeta, Jon Peddie, Neil Trevett, and the alliance’s membership. Even industry leaders who couldn’t be at Immersed in person found a way to be helpful. In some cases, wiring in their membership dues last minute gave us the means to pay for the venue while we waited for the sponsorship and ticket sales to balance things out. Everyone did their part to make Immersed work; and we are grateful.
I want to thank all our speakers, sponsors, exhibitors, and attendees. While the Immersive Technology Alliance was the facilitator, you’re the ones who made Immersed the must-attend event it became. I’m honored that not only did you come to Immersed, you had the confidence in us that we could pull this event off the way we did without prior experience. Thank you, and thank you again.
We still have a raffle draw to do (we will!) for prizes from Next Galaxy, Worldviz, AMD, and Leap Motion. Thank you for the contributions, and we’ll get to it soon! 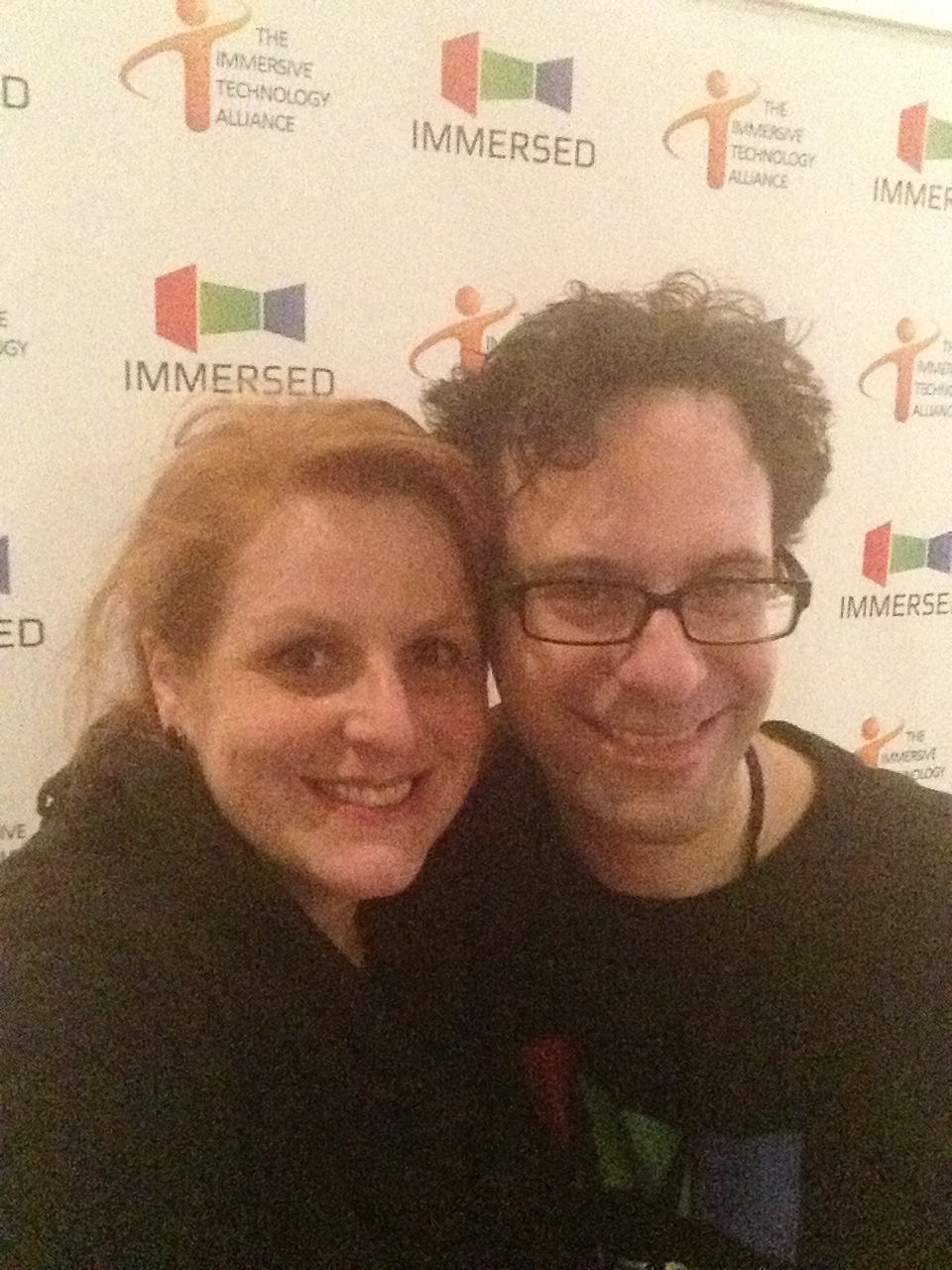 Finally (yes, finally!), I want to thank my wife Pam and my son DJ. Pam for helping me build this conference from the ground up, and DJ for the time I spent working on Immersed instead of spending with him. I love you both!
People have been asking me how I feel about Immersed. I feel proud. I’m proud that our industry got together in this way, and will do so again. I’m proud that we demonstrated that we have a vibrant and diverse future ahead of us. I’m proud that Immersed brought out the best in everyone, and marked the beginning of some great stories to come. This is the mentality and spirit that jumpstarted this industry in the first place. Until recently, I thought this spirit was lost and forgotten. I’m proud to say it’s been found again. Thank you all for helping me find it.

Congratulations to everyone for helping make Immersed the must-see event on the East Coast!  See you again in 2015!