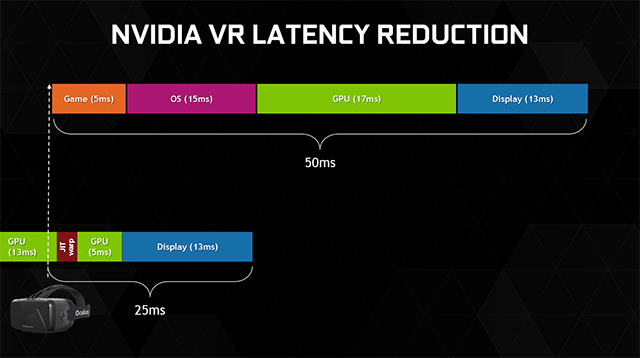 This is a very exciting development from the Nvidia camp.  A major curse that has plagued VR technologies like the Oculus Rift is latency; the delay between head movement and seeing the change in photons on the screen.  This disconnect is a major contributor to motion sickness and all around discomfort in VR.
While modern GPU technology is able to achieve about 57 millisecond (ms) latency, the goal is under 20ms.  Nvidia’s new Maxwell GPUs (e.g. Geforce GTX980 series) are working to solve the problem by reducnig the number of frames rendered in advance from four to one.  Their new technology can reduce this latency by as much as 33ms bringing things down to a theoretical 24ms total.  Nvidia is also doing further tweaks to tighten things up further, and are nearing completion of Asynchronous Warp, a technology that is expected to improve head tracking latency to the point of being virtually unnoticeable.  Of course, this sounds cool!

Nvidia also has a demonstrated history of releasing Nvidia 3D Vision drivers to support stereoscopic 3D with Nvidia 3D Vision glasses.  Similar to other solutions in the market, Nvidia is getting back in the driver game with Auto Stereo.  Combined with their stereoscopic 3D rendering techniques, they will be mapping head tracking to keyboard and controller movements.  They have a strong library of games to work from, so we’ll see how this turns out.

Their remaining optimizations are all about the eye candy with Voxel Global Illumination, Dynamic Super Resolution, Multi-Frame Sampled Anti-Aliasing, and Protomatter Transmorphisis.  That last one was a doozy! 😉