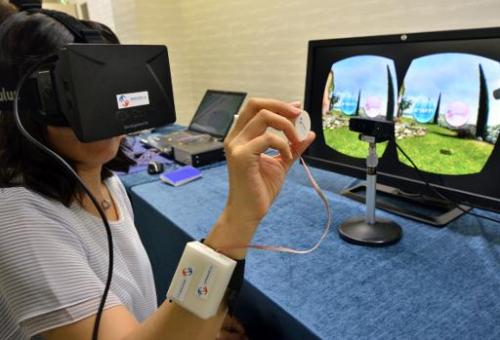 Haptics usually refer to a sense of touch and resistance. While a vibrating phone is a simple form of haptics, there is far more excitement around being able to feel digital objects or your hands getting actual push-back as you work in a digital world. The problem is these more complex forms of haptics usually require a fixed sturdy object or complex machinery to have any real sensation.

A story has been circulating about Miraisens, a high-tech firm based outside Tokyo that is working to commercialize a new haptics technology. The inventor Natsuo Koda is formerly a Sony researcher for virtual reality.

Koda’s haptics technique is based on illusion as much as reality. By vibrating an object at certain frequencies, it can seem to be pushing in different directions when it doesn’t actually have a physical force attached to it. There is obviously a lot of potential behind this for game controllers or VR interface devices.

At SIGGRAPH 2014, The University of Tokyo and Sony Computer Science Laboratories were exhibiting the same concept under the name Traxion: A Tactile Interaction Device With Virtual Force Sensation. A picture explaining how the technology works is attached, and it’s credited to Dr. Jun Rekimoto, Professor of Interfaculty Initiatives in Information Studies at the University of Tokyo, as well as Director, Interaction Laboratory at Sony Computer Science Laboratories, Inc.

We tried it, and it definitely works. It’s not enough to slap your hand in a direction. Instead, it’s like getting the sensations of physical resistance without the actual consequences of forced movement.

Bright minds obviously think alike! We’re even wondering if these two developments have anything to do with each other – especially since both inventors work or have worked for Sony in a research capacity, and they are both based in Tokyo.