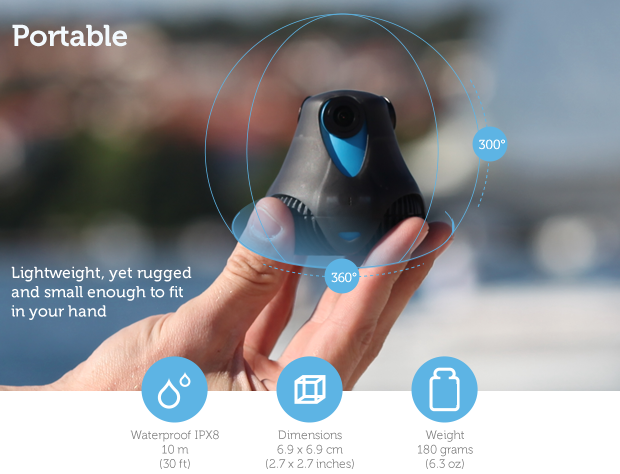 This is definitely one of the more exciting things we’ve seen recently. The Giroptic 360cam is a new 360 degree panoramamic camera that is designed to bring a lot of value in a little package.

Featuring 2048X1024 resolution in each of its three camera lenses for video mode (double for photos), the camera lets you capture stills, videos, and streaming videos that can be viewed on all kinds of displays including VR HMD solutions that have head tracking. It promises full 360 degree coverage with up to 300 degree vertical range so you can also look up and down while watching your footage with VR devices.

In our opinion, it’s the practicality that makes this a winning combination. For example, it features a special light bulb socket adapter so you can screw it into a lamp or ceiling fixture and get 360 degree surveillance. With the right lens cap, it’s also touted as being water proof so you can capture wondrous visions of the deep…hopefully before that shark gobbles you in VR form!

The only caveat is it’s unclear if this is a stereoscopic 3D (S-3D) camera which is very important for immersive VR experiences.  It may be limited to panoramic viewing without the S-3D benefit, OR…maybe software can compensate for the hardware design.  We’ll have to wait and see.

While video games and the metaverse are early drivers for VR content, it’s equally if not more important that everyday people can easily create and share complete experiences too. We’ll see if this camera has what it takes when finally released, but you can’t help but be impressed by what devices like this could eventually mean for the industry on a mass scale.

Giroptic has an active Kickstarter which may have already reached its $150,000 goal by the time you read this.  So we will send them a preemptive congratulations!