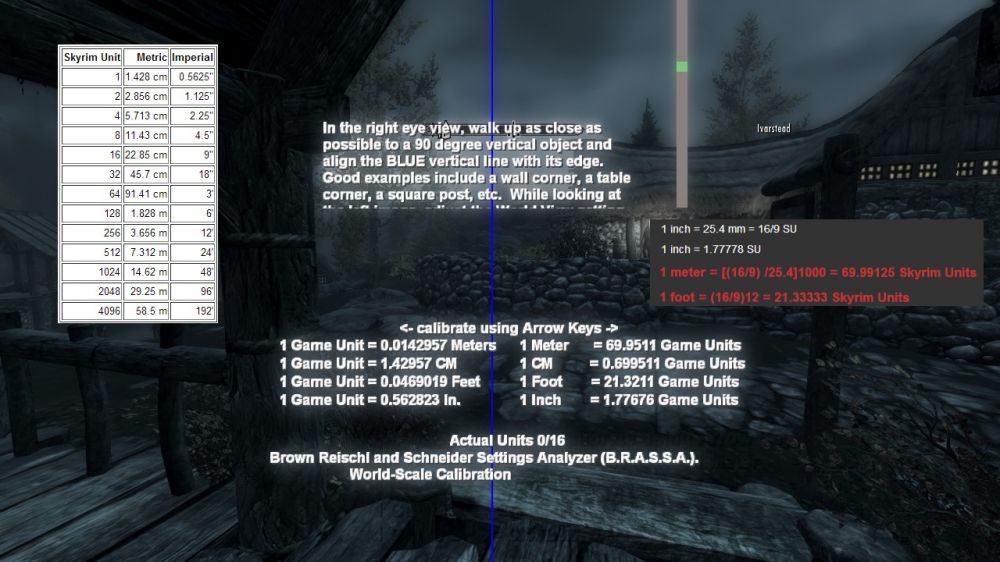 Vireio Perception are free open source drivers that let you take existing games and play them in VR with solutions like the Oculus Rift, castAR, 3D solutions and more.  With just ten days to go before the first public build of Vireio Perception 2.0 is released, we thought we’d show a sample of just how innovative this software is going to be.

One of the big differences with our new version of Vireio Perception is that instead of using separation and convergence to manually adjust the stereoscopic 3D settings, we use the user’s interpupillary distance (IPD) to determine the best camera placement in the game.  What better way to ensure a comfortable VR gaming experience?

Here’s the problem: IPD alone isn’t a complete formula.  You also need to know the game’s “world scale” so that real world IPD is properly translated in the virtual world.  When game developers create experiences, they are usually based on rule of thumb measurements of game units against real world measurements – this is the world scale.  We needed a way to apply these rules in Vireio so the VR experience is as true to life as possible.

Now we can!  Using Skyrim as an example, Vireio Perception reads the game structure and automatically calculates the game unit to real world relationship.  In the above picture, Skyrim’s official units and relationships are pasted in the image to show that Vireio and the game are speaking the same language.

This tool (which has several parts) is called the Brown Reischl and Schneider Settings Analyzer (BRASSA), and is named after Josh Brown, Denis Reischl and Neil Schneider.  While we are all ideas people, special credit goes to Denis Reischl for turning concepts into reality.  BRASSA won’t work with every game, but it definitely makes finding first-time settings a cinch.

Now…as exciting as this feature is (and it IS exciting)…the best is yet to come.

In the meantime, even though Vireio Perception are free and open source drivers, they will be hosted in a private downloads section on MTBS.  We don’t know how popular they will be, so if you don’t yet have an account, please take the time to get yourself registered on the front page of the site (under the membership tab).  If you have an existing account, and have had difficulty getting on the site, email customerservice@mtbs3D.com so we can help resolve the issue.

Please take care of this in advance as it will be one less step to deal with when everyone is rushing to get their build.  Thanks again for your patience with this; we are all excited about this software release!