“We are witnessing the market morph and grow into different areas. This has always been a strong point of PC gaming; the ability to adapt to different entertainment environments and requirements. The hobbyist aspect of the DIY market is driving billions in component sales and small form factor rigs are being hooked up to HDTVs, essentially being used as `super consoles'” – Ted Pollak, Senior Gaming Analyst 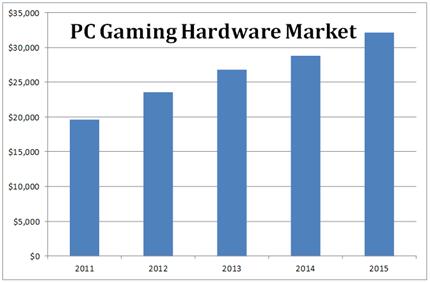 Jon Peddie Research is predicting that the PC gaming hardware market will amount to nearly $24 billion in value by 2015.  They also estimate that there are 54 million Performance and Enthusiast class PC gamers worldwide, with new entrants and console converts growing this to 72 million by 2015.

Jon Peddie, President of JPR, sees stereoscopic 3D as “huge potential” on condition that standards take hold.  He should know!