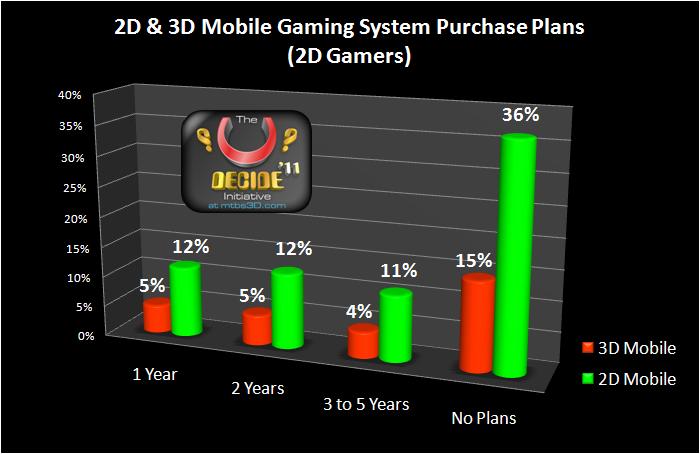 There is something to be said for having confidence in your own work.  Earlier this year, we released the 2011 U-Decide Initiative report that revealed the opinions of traditional 2D and experienced stereoscopic 3D gamers.  The report covers everything from S-3D game design, to demand and purchases plans for all kinds of 3D technology and products.

One part of the study focused on “mobile gaming systems”.  We purposely didn’t mention the Nintendo 3DS in the survey because we didn’t want to lead the audience.  While we revealed our findings at a private school lecture, we were hesitant to post this online because with all the hype around the Nintendo 3DS, we had trouble believing it ourselves.  Other technologies like 3D HDTVs and PC displays…glasses and all…had much higher interest rates and earlier purchase plans than mobile gaming systems like the Nintendo 3DS.  Double checking our work, we thought it was an aberration because the 3DS wasn’t out yet and few people had a chance to see it up close or truly understand what it was.  The results just boggled the mind, to be honest. 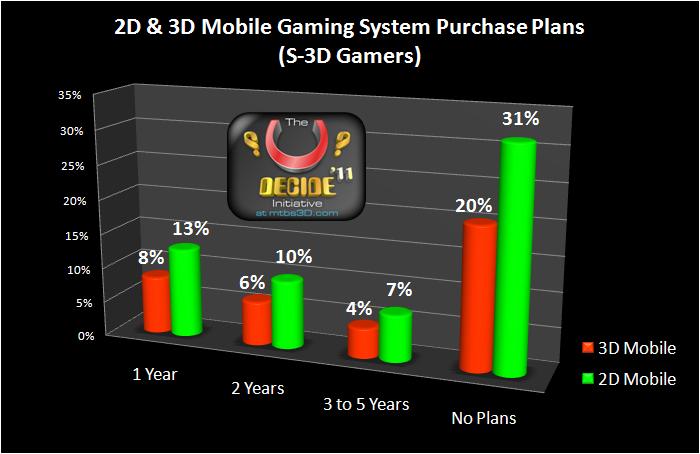 In practice, as much as 750,000 Nintendo 3DSes have already been sold in its first five days, and Screen Digest is anticipating 11.6 million units in gamers’ hands by the end of the year.  While these are very positive numbers, it doesn’t add up to the hype and drool put out by the anti-glasses gaming media, and few expect the 3DS to match up to the DS’ sales record of 145 million units to date.  This isn’t an indication of low interest in 3D or that 3D is a deterrent somehow.  In U-Decide, the entire demand level for mobile gaming systems was disproportionately low regardless of the 2D or 3D element, and it didn’t matter if the respondent was a traditional 2D or experienced stereoscopic 3D gamer.  While we appreciate that the study’s sample wasn’t a perfect match for the 3DS’ customer base, it looks like we had an early indicator of Nintendo’s moderated sales.

No matter!  We are all Nintendo 3DS fans here, and we have lots of stuff in the works.  Keep coming back!