A few weeks ago, we had the opportunity to interview Dr. William Provancher, Founder of Tactical Haptics.  His team has been working on an exciting new controller (the “Reactive Grip” controller) for gamers and VR enthusiasts, and today marks the launch of their Kickstarter!

William is back to share the latest details, and highlights some content development ideas for future haptics professionals!

MTBS: Today is the big day! How much money do you need to raise and what can people expect for their investment?

WP: We’re looking to raise $175,000. For their investment, people will receive one or more of the following: project updates, access to our developer forums, a Tactical Haptics “Get a Grip” T-shirt, Reactive Grip controller(s), or even spend a day with us to see our past designs and related research.

MTBS: When would you like to see Tactical Haptics controllers in people’s hands?

WP: We are targeting to deliver our first production development kits in October 2014. We’ll need several months after the Sixense STEM design is finalized to ensure proper integration of the STEM modules into our design before our manufacturing can begin. Early delivery development kits will also available and are planned to be delivered in April 2014. 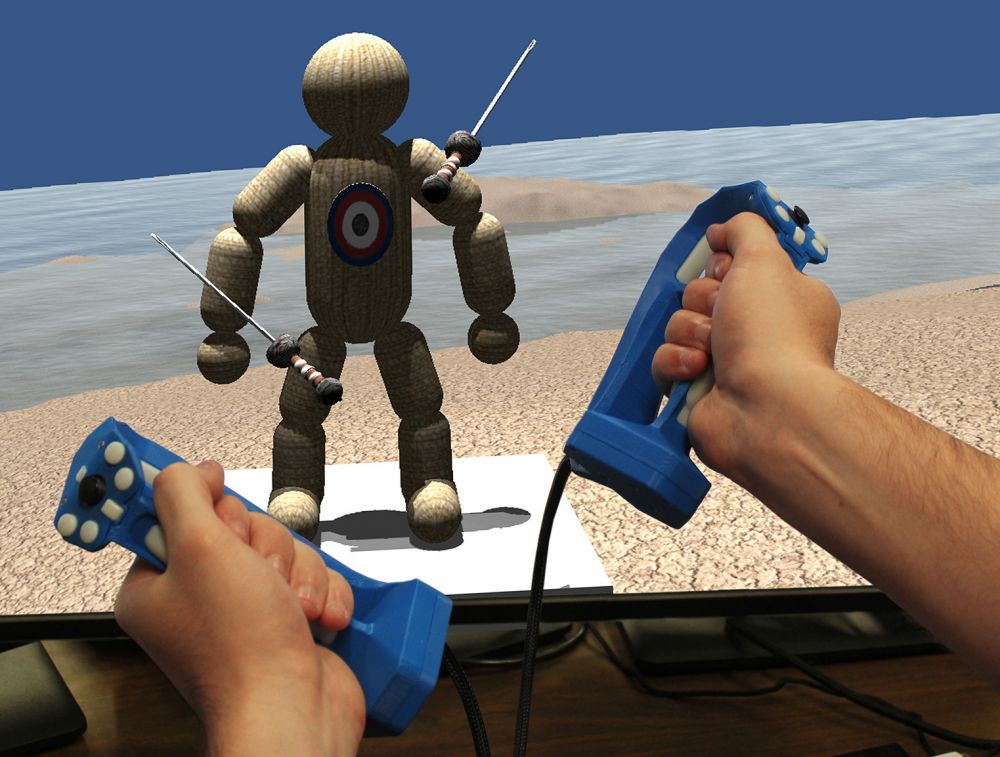 MTBS: How much do you expect Tactical Haptics controllers to cost via Kickstarter?

MTBS: What are the updated Tactical Haptics controller specs?  How does it compare to earlier models?

WP: Our formal feature list is written as follows:

The controller is also less than half the weight and two-thirds the size of the Orange device that we demoed at GDC earlier this year.

MTBS: Up until now, the console market has been locked down to the XBOX, Sony and Nintendo world – and most if not all the supported peripherals are determined behind closed doors. Valve’s Steambox is base on Linux, and I would venture the hardware compatibility will be a somewhat more open model. Is Valve’s Steambox strategically important to Tactical Haptics? Why or why not?

WP: I don’t know if Steambox will be strategically important to Tactical Haptics, but any platform that is open like the PC will certainly be beneficial to new peripherals.

MTBS: You recently visited Valve to show off your controller prototype. What did they think? Do you think some opportunities will come to fruition from this? What would you have liked to accomplish from your meeting?

WP: There was some enthusiasm for our technology, but I’d prefer not to speculate on what will result from the meeting. My goal was to make their developers aware of our technology and the sense of presence it can provide in a virtual or gaming environment. However, I was told that their VR group was exclusively focused on commercially available and standard peripherals at this time, so things may take a while to percolate to get somewhere. I’ve since had some other interesting meetings with other game developers that have shown more promise, so we’ll see what the future holds… 😉

MTBS: Software practically MAKES the hardware. After people get their kit, what start-up software will they have access to?

WP: Development kits are scheduled to start shipping in Oct. 2014. When they do, we’ll have SDK support for Unity and C++ games and projects. We’ll also make source for several of our demos available so that people have examples of implementing our touch feedback in several gaming scenarios. 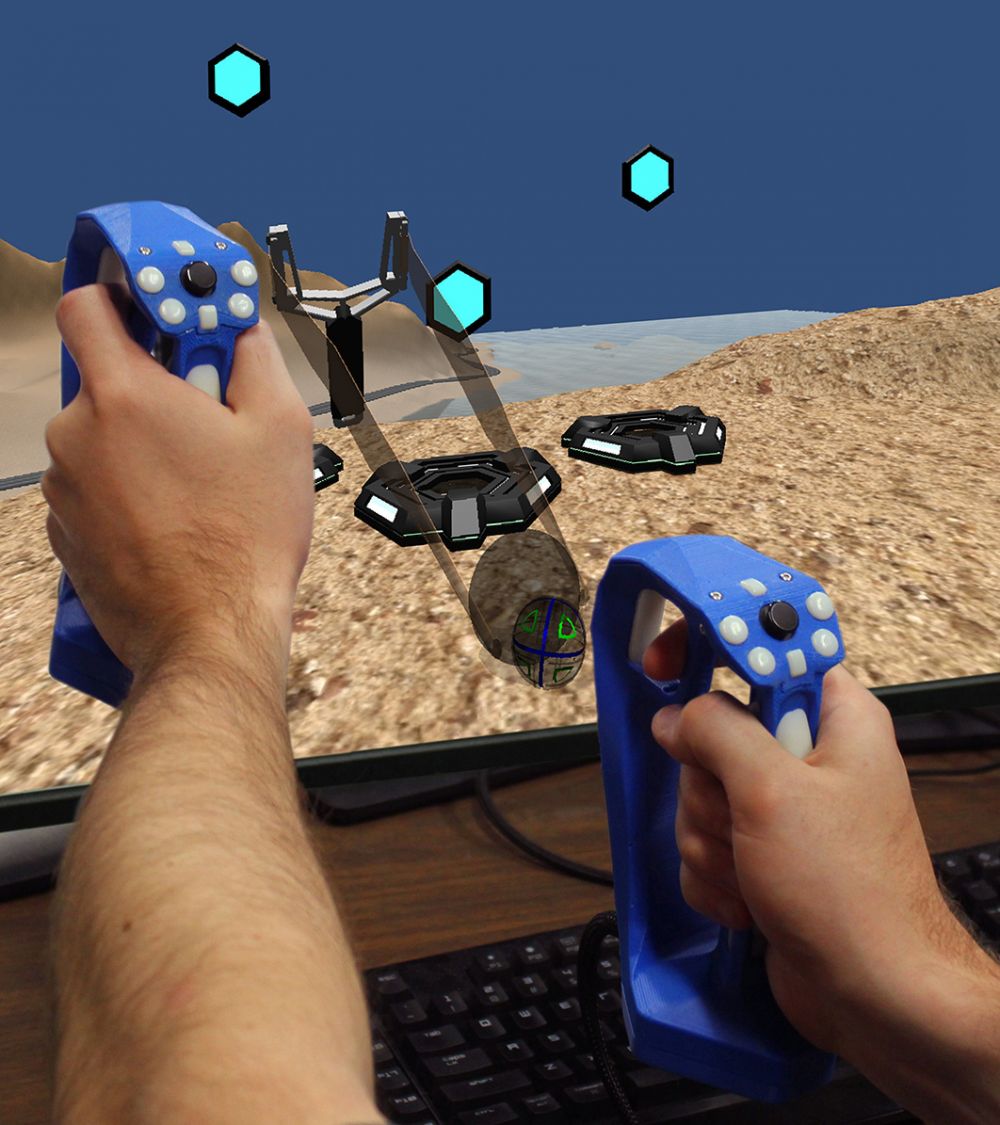 MTBS: Since we spoke last, castAR has really been storming the world not only with a really cool method for augmented reality, but they have excellent VR potential as well. Their glasses tracking techniques supposedly have 7mm positional accuracy which strikes me as being very impressive; at least on paper! Do you think your controllers’ positioning would benefit from their technology? Do you foresee any compatibility issues?

WP: Our haptic controllers will be “STEM-ready” but are tracker independent, so could also use optical tracking methods like those used by Technical Illusions in their castAR system.

MTBS: When most people buy your controller, this will be the first haptics experience they have outside the confines of a vibrating joystick. What are some content creation lessons you have learned that should help future content makers?

WP: The key is to pick some type of real world physical interaction and mimic this in the game. Whether it is a simplified version of the interaction or trying to represent complex physical interactions, if the user/gamer has a good mental model for that interaction, that is that they can imagine how it would feel, it will be more successful when it is implemented. We’ve demonstrated this type of physical interaction through demos that range from fishing, to melee combat, to projectile weapons. This also works for interactions as simple as groping for a wall to know your destination “in the dark.”

MTBS: There is a lot of excitement around your product, so let’s be optimists and say that your Kickstarter gets funded, the tech lands in developers’ hands, people get a taste of what they can do with your controller…what then? What is the long term hurdle you’d like to overcome beyond this first round of technology development?

WP: The real key is to get beyond the next hurdle, which is having AAA game developers integrate support for this type of touch feedback into their games. We need to break the cycle and end the chicken-egg scenario where developers won’t touch a new game peripheral until there is install base and consumers won’t buy new peripherals until lots of great game content exists. We hope that we can rally support to break this cycle by getting gamers and VR enthusiasts involved at the ground level with our Kickstarter.

MTBS: VR has come and gone before. Haptics devices have existed in different forms as well – though yours works differently than what has been on the market to date. Why will VR succeed this time around? What are the markers that have convinced you that this is the right direction for your career and the industry at large?

WP: I think that the required technologies have simply come of age. And that the experience is now good enough at a low-enough price point that this will draw in a substantial number of people into VR. And this influx will cause VR to explode, due simply to the fact that so many more people are involved… which in turn will cause companies to see this as a viable market and drive further hardware innovation, performance improvements and cost reductions.

Thanks for visiting MTBS, and congratulations on getting this exciting Kickstarter launched.  I’m certain countless gamers and enthusiasts have been impatiently waiting to help back this effort, and we wish you much success.  Good luck!