Undercurrent is a first person diving game being developed by Hammerhead Studios.  Early in its alpha stage, Undercurrent is a VR-focused game originally designed for a walk-in VR enclosure, which is now set to utilize the Rift’s portability and accessibility.  In development by a small group of students, it is poised to ride at the forefront of a wave of Virtual Reality software. 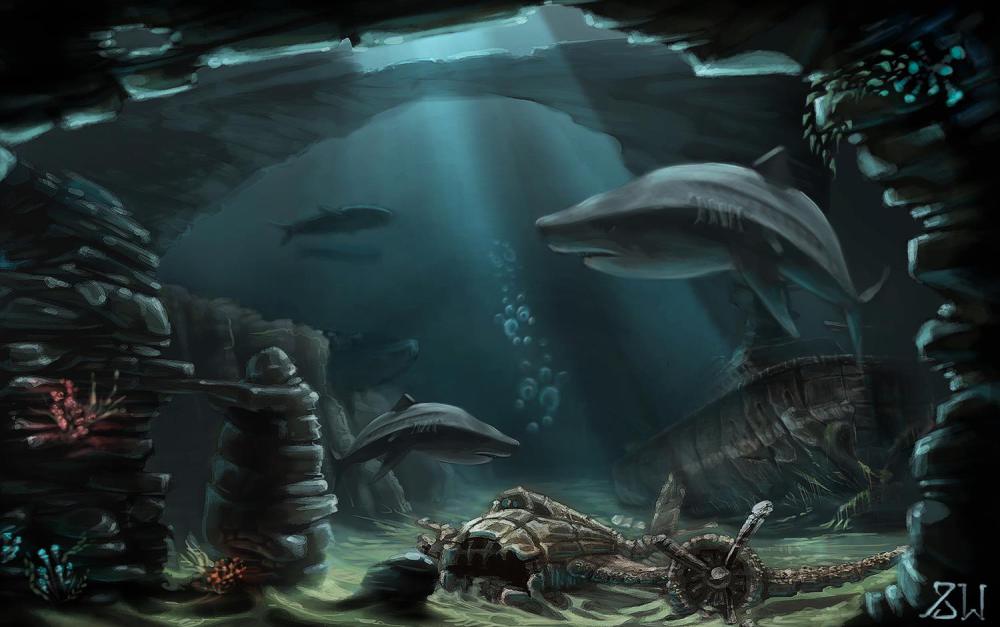 The game is set in the Bermuda Triangle, which transports you to a foreboding seascape filled with the debris of a sunken cargo ship; lush flora and beautifully animated fauna teaming around you.  Featuring a mysterious if not outright threatening ambient soundtrack, Undercurrent seems to have been designed with immersion in mind.  Donning the Rift and slipping into the perspective of our diver is an eerie experience to say the least.

In its current form, you play a humanoid robot that is travelling through fantastical underwater landscapes in an exposed submersible frame.  You jet about with smooth controls, focused not on platforming or maneuvering – but on exploration and discovery.  Peering through tangled piles of shipping containers and considering the hulks of shipwrecks in the distance, there is a real sense of intrigue.  As I played, I wanted to see more: the demo environment feels one part inviting and one part dangerous.  This push/pull is at the core of every adventure.

The Undercurrent demo was so engaging and impressive, I reached out to Hammerhead Studios to learn more.  MTBS welcomes Christian Frausig to the virtual interview chair!

MTBS: Did Hammerhead work on any projects before Undercurrent?

HH: Undercurrent was developed as a university group project at Teesside University.  Hammerhead was established when we realized that we had left a blank after “Company Name” when applying for Rezzed. 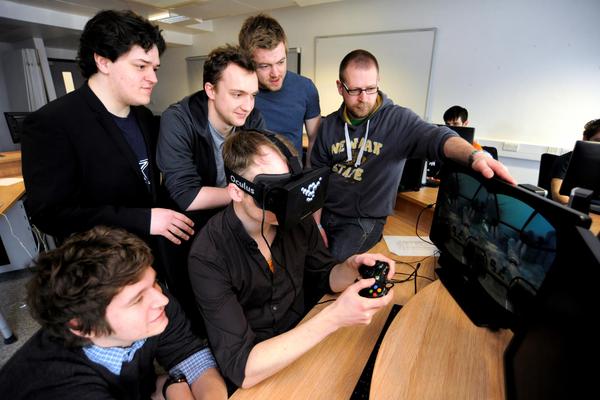 MTBS: How big is your team?

HH: Our current team is five people, but we are always looking for individuals and teams to collaborate with.

HH: We tried to reduce cybersickness by situating the player in a cockpit, and lowering the speed of the vehicle and the world.  A submarine game solved both of those issues for us, as well as providing a compelling environment for the player to immerse herself in.

We also felt bad for the ocean, seeing that everybody is raving about space these days.  There simply aren’t enough underwater games despite the ocean being largely unexplored and full of crazy lifeforms and phenomenons, which makes it ideal for suspense and sci-fi.

MTBS: Undercurrent seems perfectly matched to the Oculus Rift, but I understand it wasn’t originally designed with the Rift in mind.  What impact has designing for VR had on the development cycle?  Has integrating VR into the game caused any unexpected problems?

HH: Before the Rift announcement, Undercurrent was designed for the VR CAVE at our university. CAVE tech has far more limitations than the Rift, so making the switch was not a difficult choice. The toughest thing was designing and developing the game without access to the Rift. The most important thing is to nail the scale and acceleration from the beginning. With the next iteration we’ll get this just right. 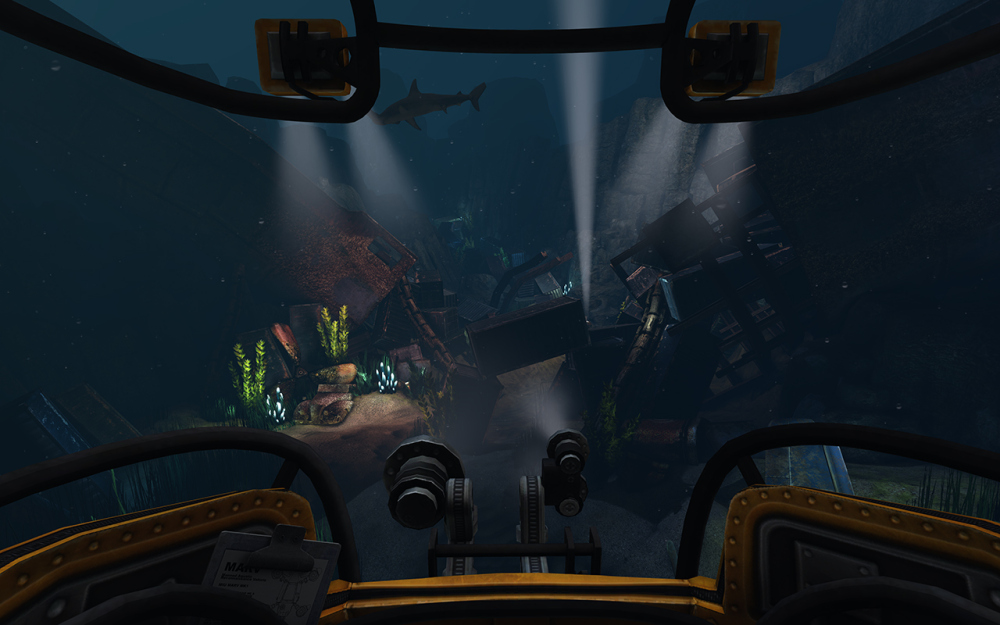 MTBS: The submersible and the robot body are very aesthetically interesting.  Are they placeholders, or part of the theme you wish to establish?

HH: The robot is a placeholder, although I would not reject the notion of using a mechanical avatar for the final game. The robot was added to improve the sense of presence. The body still needs correct scaling, as well as represent the real body position of the player to strengthen the link between player and avatar.

MTBS: Undercurrent currently exists with a focus on exploration, and a survival mechanic involving oxygen canisters.  Will this be the core of the game, or do you have other mechanics you wish to introduce?

HH: The mechanics will be completely reworked.  We (are) looking for suggestions from the VR community as well as testing different features.

MTBS: Do you have a specific genre in mind?

HH: I guess it would be classified as an adventure game, but I personally prefer to classify games in terms of Marc LeBlanc’s Aesthetics of Play, which for undercurrent would be:

Fantasy – Simulates the sensation of deep sea diving, and lets you experience the aquatic environments and strange marine life as if you were really there.

Discovery – Let your curiosity lead the way as you explore the wonders of the Bermuda Triangle, and shape your own journey of self-discovery. 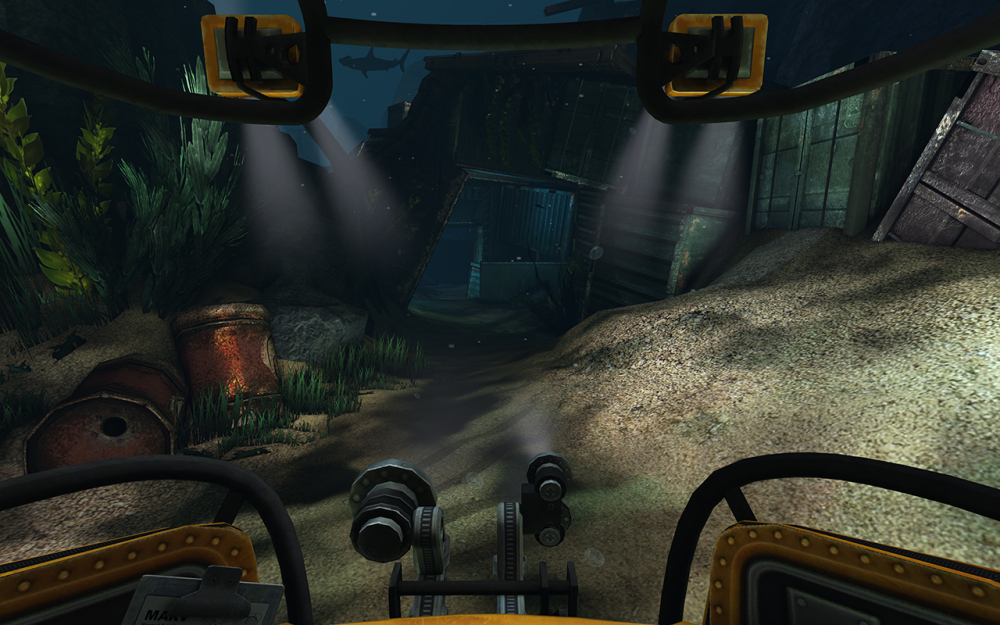 MTBS: What kind of experience are you trying to share?

HH: Immersion and emotional engagement are very important to the game, as we want to leave the player with a feeling that she has truly travelled to another world. The dim ocean floor is an eerie place, with strange life forms populating the iron graveyard of wrecks. This tension and fear is partly alleviated by beauty and wonders of the deep seas, as you discover a world unlike anything you have seen before.

MTBS: Can you tell us about any of the future environments that will be added to the game?

HH: We would really like to go further down, as the deep dark seas is where the real marvels live. We would like to vary the openness of the environments, and draw the player into tight crevices and deep craters. The biggest challenge is to limit ourselves, as anything could potentially exist under the surface, as the waters are largely unexplored and all everything is transported via sea or air.

MTBS: In the demo, I had an interesting experience with a shark swimming close by, and it felt tangible and present.  Do you have plans to expand the role of natural sea creatures?  What kind of player-animal interactions do you have planned?

HH: Absolutely! We hope to include much more interactions with sea creatures, whether you are hiding from sharks in the tall weeds or riding the stingrays that emerge from the sand.

MTBS: Due to the remote nature of the ocean, specifically the deep sea, there are some natural horror elements that the game could draw from.  Do you have any plan to make use of isolation to create a sense of horror or suspense as the game progresses?

HH: Rifting is a very solitary experience, as you are literally cut off from the real world. This complements the sensation of separation you get from exploring the seabed, far below society as we know it. This makes the sense of helplessness that much worse when the screen is slowly cracking under the immense pressure.

MTBS: Can you share anything from your development road-map?  Any big goals, impressive settings, or other tantalizing features you could tease us with?

HH: I am sorry, we do not have anything to share just yet.  We are mainly focusing on setting up the studio and ensuring our financial sustainability.  The business side of things is uncharted territory for us, so it requires a lot of attention.  We cannot wait to dive back into development soon, share our plans, and start a dialogue with the community.

MTBS: The Bermuda Triangle is an intriguing setting; how would you like it to affect the game?

HH: The Bermuda Triangle basically allows us to go wild. That is all I can say for now.

MTBS: A lot of successful software ventures are using crowdfunders like Kickstarter to get their projects off the ground these days.  Do you have any plans to begin a funding campaign at some point in the future?

HH: We are exploring a variety of avenues, and Kickstarter is definitely a strong candidate.

Undercurrent is a game that shows a lot of promise as both an adventure and a place.  The environments shown in the demo have character and presence.  The current sound effects and music really add to the aesthetic, which is a new and creative medley of underwater themes.  As I mentioned earlier, the animations are fantastic, and you can see just how much work is being put into them throughout Hammerhead’s development blog. 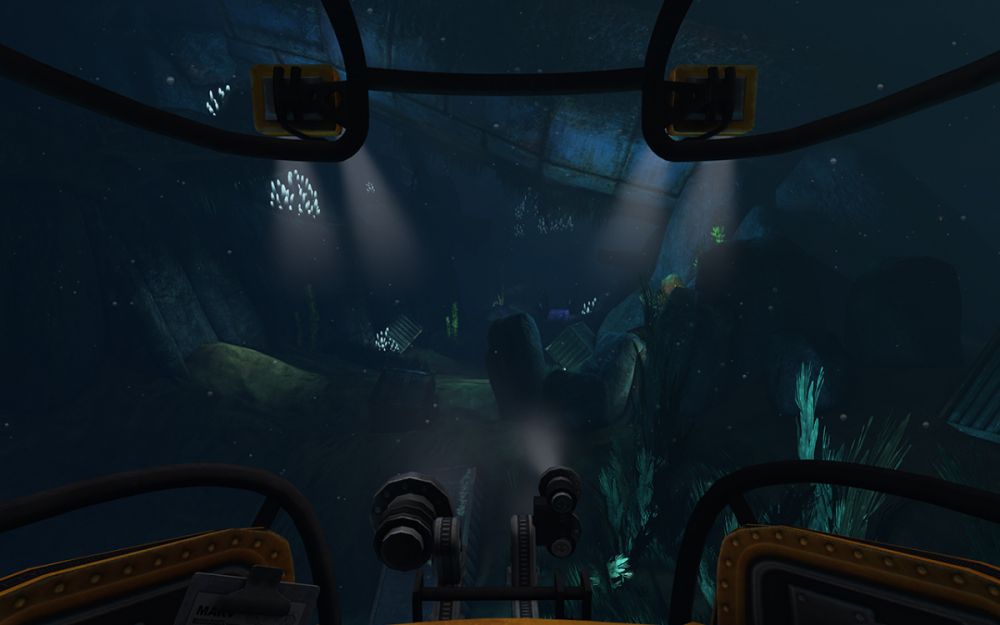 The underwater setting and the medium of play have a nice synergy.  The mechanics of exposed deep-sea diving preclude some kind of suit, so the presence of the Rift on my head and its weight on my face are much easier to dismiss in this context.  I suspect that games that involve an avatar that wears a mask, helmet, or goggles will be that much more immersive because no matter how lightweight an HMD becomes, the mind will be aware of it at some level.  This is definitely in Undercurrent’s favor, adding to the sense of immersion and transportation.

A few secretive answers have served to make Undercurrent all the more mysterious.  I think it’s a game worth taking note of now because it may help define some of the parameters successful VR games follow in the not too distant future.  This has been the most immersive experience I’ve had with the Oculus Rift to date – keep Undercurrent on your sonar!