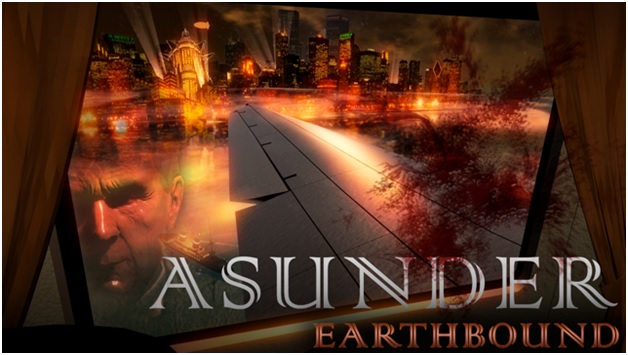 The bars around your cell are long behind you, or are they? Your face is plastered all over the newspaper for a jail breakout. You must not be recognized. How you got on the plane is not important. How you escaped from prison is not important. Where you are going is not important. What’s important is that you don’t lose it here. Freedom is finally within grasp. This is the game of Asunder: Earthbound for The Oculus Rift.

Asunder: Earthbound revolves around the challenge of remaining anonymous on a cozy airplane flying across the ocean. This is an interesting idea, but falls short of its potential. It is implemented through the use of small environmental puzzles.

Sadly, the puzzles are not very engaging and can sometimes become slightly frustrating. This frustration is quickly solved through a great hint system built into the environment, though.

Another minor issue is how the characters still recognize you when you’re turned away from them. Perhaps they could have had someone reach over and grab you if they are ignored for too long while in conversation. Then they would see you close up and you’d lose instead of being magically recognized while looking away from someone in the middle of a puzzle. Again, a minor complaint, but the little things can make a big difference. In short, the puzzles could be a lot better. It would have been a large boon for this game if they were. 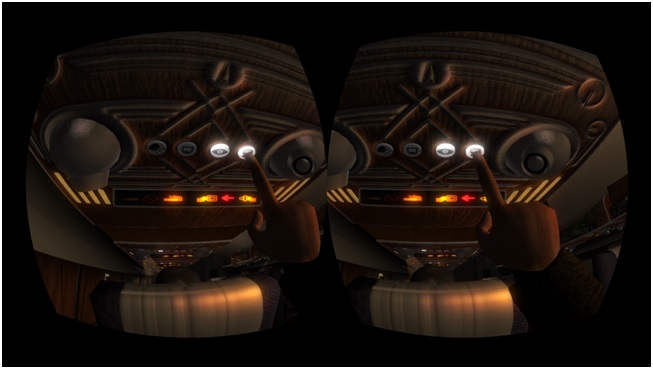 The hint button, along with some other controls and notification lights.

The puzzles do not make up the whole game though, and the real fun starts after you get past them. Here the game’s atmosphere quickly changes to one filled with dread – and every second of it is great. You really get immersed in the situation. This part allows the gaze tracking technology to shine.

At its core, gaze tracking is simply utilizing the knowledge of where the player is looking to change how the game behaves. While gaze tracking is present all throughout the game to help communicate with NPCs using head motions and create an intuitive control scheme, it does not drastically change how the game feels. But when the end approaches, it changes everything. At this point in Asunder weird things are occurring, and the knowledge of where you are looking is used to enhance the timing of events and achieve a much more dramatic effect than simply initiating conversation.

An older game that used the gaze detection strategy in a similar manner is Sight Line, which took third place in the VR Jam contest. This technique is very powerful and should make a splash in many future games. Positional audio was also used in this part to great effect.

Finally we come to the ending, and it did feel slightly lazy. Since this is the first game in a series of chapters the ending should not be judged too harshly. But it really could have been much better by just using a scene from the extras plus some swimming. Speaking of the extras, check them out after you beat the game. There are some really creepy ones, relaxing ones, uncomfortable ones, and one that is a great example of what NOT to do to players in Virtual Reality.

Speaking of virtual reality, we cannot overlook its inherent immersion factor. The environment can be a gigantic contributor to this immersion. Since virtually all of Asunder takes place on a plane there is only one chance to get the environment right. Thankfully, they do a very good job it. The airplane graphics are good enough to make it compelling while still allowing the game to be run at 60 fps with relative ease (using a GTX 660) most of the time. Having a consistently high frame rate is critical in Virtual Reality games. As a result the difficulty involved in maintaining high frame rates is something to take note of. It can help prevent motion sickness and create smoother motion.

In almost all VR games the 3D effect is amazing, and this game is no exception. It really helps you realize just how small and vulnerable the plane is. The glass effect on the airplane’s windows is also surprisingly neat thanks to the 3D. One caveat with the environment is that it is lit too brightly for a plane flying over the ocean in the dead of night. This took away from the immersion for me. Even when your seat light is turned off it is still a bright area. Worse is that when all the lights do go out, some surfaces stay illuminated. However, by the time that graphical glitch occurs, you’ll probably be too involved with the game for it to bother you. 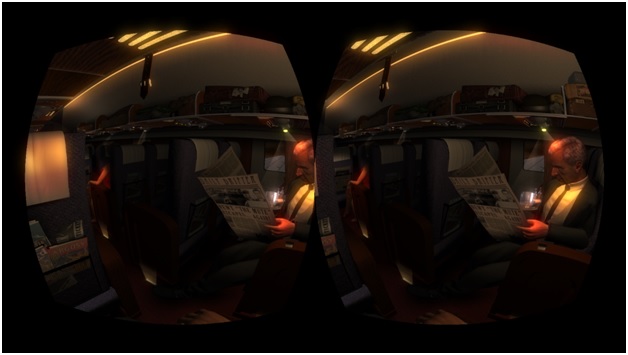 You will become very familiar with this plane. Also, that man likes to talk.

Ignoring graphical fidelity, the environment is designed quite well. It is detailed and contains items that offer insight into the game’s world. Virtual Reality seems to amplify the effects of having a detailed environment. This is probably due to how much more one looks around when compared to traditional games and also how much more involved the player is. As a result, there is a much higher chance to discover and focus on small details placed throughout a level (like newspapers). These items have a surprisingly large effect on how rich and believable the world feels.

The last thing to bring up is some of the camera choices. There are some interesting ones and some that are just really uncomfortable. Thankfully the uncomfortable one is brief and only happens in an early death scene. This death scene makes a very odd design choice for VR: it causes the camera to shake violently.

Perhaps camera shaking would enhance the game in the right situation, but in this case it just detracts from the death and makes the player feel very bad. Another interesting choice was to have the player laying down in a few scenes. This was understandable in one of them, but the other one could have had the player standing or sitting instead. It is a bit puzzling why they chose him to be laying down. For me it took away from the immersion since my position in real life was very different than his. Even standing would have been better than laying down facing up, as the perspectives would match.

In the end Asunder: Earthbound feels more like a good, extended tech demo rather than a game. It strikes a balance between calm puzzles and intense horror, while keeping the horror bearable and comfortable (unlike the atmosphere Dreadhalls created for most people, where the game became hard to play due to its scariness). It also utilizes gaze tracking to simplify the control scheme and create immersive, innovative game events. All of this helps make it a memorable and exciting VR experience.

Unfortunately, this doesn’t make up for the lack of compelling gameplay and the very short length, lasting only 20 to 40 minutes in my experience. The combination of these downfalls and strengths contributes to a tech demo feel. This is a good start as Aldin’s Dynamics first game. It does very well in some aspects, but fails to deliver in others. Hopefully the future chapters will fix these shortcomings and they can rid themselves of this rocky start.

How Memorable Is This Game
8/10