The Doom franchise started as a follow-up to Castle Wolfenstein 3D, and arguably marked itself as a true proof of concept for the first person shooter, and popularized the genre into the gaming standard we have today.

Thinking back to 1993, I think everyone has a Doom story to share. Mine is that I showed it off to my soon to be girlfriend. I don’t think she was as impressed with the game as I was, and I honestly don’t know why she pursued me after I used Doom as my courtship showpiece, but maybe…just maybe…I owe John Carmack more than he realizes!

After a series of installments based on the same graphics and premise, iD Software reinvigorated the franchise with Doom 3 (2004) and the Doom: Resurrection of Evil expansion pack (2005). Backed with modern OpenGL graphics, Doom transformed from a pixilated proof of concept, to a virtual world of dark humor, horror, and hooligans.

Eight years later, Carmack is back with Doom 3 BFG, an amalgamation of all the Doom games and more. Modernized for PC and console, the game features 1080P graphics, a refreshed look, a new full length mission, and…most important of all…stereoscopic 3D support on AMD and Nvidia platforms for PC gamers. There is 3D console support as well, but this is a PC gaming review.

For modern gamers, the pioneering Doom 1 and 2 releases are more a gaming history lesson than a valuable use of your time. Even though it’s a direct port from the early MSDOS versions and will scale to modern screen resolutions, it’s as blocky as ever. 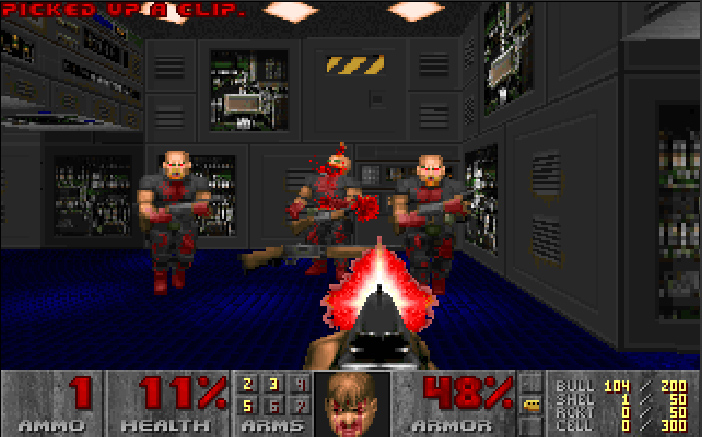 It’s amazing how technology develops because I remember it being a lot scarier and more graphically intensive than the way it truly looks. However, setting the graphics aside, most of the elements of a modern first person shooter can all be found in the original Doom series. 20 years later, it’s still a relevant bible for FPS game development.

Doom 3 is where all the real action is happening. The year is 2145, and Mars is the home of a corporate research station. You’re an unnamed (and silent) marine who has landed alongside UAC representatives Elliott Swann and his henchman Jack Campbell. It turns out that the research hasn’t been going very well on Mars because several unexplained accidents have been happening all over the plant, and the station’s leader, Dr. Malcolm Betruger, isn’t being very forthright on what exactly they are doing.

Still, you’re just a marine, so it’s not your problem, right? Wrong! Shortly after meeting Master Sergeant Thomas Kelly for orders, the station transforms itself from being a Disney monorail station to a gateway to hell with monsters, ghouls, and zombies. Fortunately, you’re the strong silent type, and you will soon be able to replace your peashooter pistol with shotguns, chainguns, rocket launchers, and if you’re a good boy…the occasional chainsaw. Yes, the acronym BFG carries significance, and you will learn about that too.

The Doom 3 story is told through a series of emails and personal logs you collect as you go from one level to the next. You will need these emails and logs to open storage lockers and collect bigger and better weapons. I really liked this because it adds to the creepiness of the game, and whether or not it’s intentional, I think the game does a great job of poking fun at corporate culture. 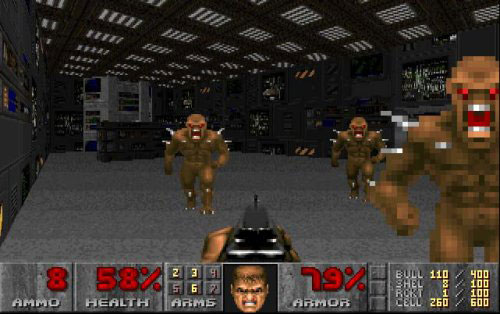 Doom 3 is even more entertaining if you play a few rounds of the first Doom series. All those pixilated characters have been re-imagined with striking detail. Those cuddly fireball throwing sasquatches have been turned into lunging monsters with vicious claws. The soldiers and zombies are a scary bunch that shoot and slash at you, and pretty much every original character has been recreated with disturbing vision. Of course, there are plenty of new enemies to deal with too, and there are lots of surprises along the way.

Graphically, out of all the characters depicted, my favorites are the marines you see at the beginning of the game. In particular, I like the ones with the goggles because you see the light reflections in their lenses, and I just think it looks cool. The other stuff is great too, but this has always stood out to me for some reason.

The iD team did a great job with the environments. As you move from one level to the next, the game maintains the theme of an advanced research station with all kinds of crazy contraptions, and manages to avoid the repetition of every place looking the same. I think the environments are a little brighter than they were in the original Doom 3 game, but they are as scary as ever. It’s a constant fear-fest as you go from one hallway to the next because there is always a chance that something will come lunging out at you, and when you hear a zombie moan, it’s creepy when you don’t know where it’s coming from.

As good as Doom 3 is with these elements, there are some caveats to be aware of. First, there isn’t enough variety in the character design. There are only a handful of zombie types, soldier types, and technician types. It’s as though Mars is a colony of butchered clones!

Also…and it never occurred to me until now…where are all the women?!? In the new mission pack, there was one female log complaining about sexual harassment (before the next log entry of her getting gobbled). Forget the gateway to hell, it’s no wonder the Mars station went crazy overnight! Heck, maybe that’s why they were trying to build this gateway to hell in the first place. The joke’s on them though…still no women!

I know this is part of the game and I’m being way too picky; I just think it’s bizarre that without warning, a wall panel will open up and a zombie will pop out. Think about it. “I’m a possessed zombie, and I’m going to hide in this secret room until that quiet marine walks by. Boy will HE be surprised! BOO!”

For tenured Doom 3 gamers, there is a bonus mission where you have to help a science technician close off a portal to hell. You’ll get several hours of play out of it, and I was pleasantly surprised to see that they backed the development with fresh voice entries, new monsters, and more fun. This alone was worth the price of admission!

So here is the big question. How is Doom 3 in stereoscopic 3D?

Believe it or not, the original release of Doom 3 is probably one of the games that first got me excited about stereoscopic 3D gaming. It was reasonably well supported by Nvidia’s legacy stereoscopic 3D drivers back in the day, and thanks to some aggressive convergence settings, it was so darned scary!

Certain aspects of the game only come out in 3D, and even tenured Doom 3 gamers are encouraged to play in its creepier form. Things that work really well are rooms surrounded by a barrier of glass that you can see through and detect the different depth layers, or disembodied skulls and monster heads flying around (and at) you.

A bonus in reviewing the game was I got to have a few email exchanges with John Carmack to talk (and learn) about how the dual camera mechanism works. I had a concern that some of the 3D effectiveness was getting lost, and I later figured out how to compensate to my liking.

Doom 3 BFG supports AMD HD3D and Nvidia 3D Vision platforms equally well. It also features support for interlaced and squished side by side / top and bottom modes. There is also a dynamic crosshair for accurate aiming during the game.

The only visual bugs I could find in the game were with two occasional post processing effects. The first is when the screen turns red during certain paranormal activities. I can’t easily localize and create a screenshot for it, but it just doesn’t look right in 3D.

The second bug is with the grabber gun. When you use the gun, it warps the screen in a way that isn’t compatible with stereoscopic 3D viewing. The morphing is just too uncomfortable to look at, and I think I figured out why. When I overlapped the left and right image, it’s clear that the warp effect looks very different from one eye to the next, and it’s not because of a change in camera perspective.

I don’t know why iD Software hid the convergence settings from plain view as they are extremely important, and are the best bet for playing Doom 3 BFG the way it’s Meant to be Seen!

First, go to the following directory. X is your hard drive letter, and NAME is the user name the directory can be found under – it is usually your username in Windows.

In a standard text editor, create a file called “autoexec.cfg”, and give it the following contents:

This configuration will skip the introductory video every time you start the game, and give you plenty of pop-out with certain screen objects and characters. If the convergence is too high for you, it can be reduced to your liking. The higher the number, the more pushed out of the screen the image will be. If you really want to be adventurous with slashing monsters, push the convergence to 40, but be aware that the gun may grow uncomfortable to look at on the screen. The separation or depth budget is best adjusted from within the game via the depth setting in the 3D menu.

The game needs to have Vsync activated with AMD graphics cards using the HD3D platform or you will see distortions and tearing. While Doom 3’s Vsync option doesn’t work well for some reason, AMD’s Catalyst Vsync option (forced on all the time) will solve the problem.

In a future patch, it would be good to see a full side by side screen capture function. John Carmack has been very helpful in pointing out a hack via the game’s console, but it’s still too cumbersome and buggy to be practical, and I know that Nvidia has no plans to add 3D capture abilities for OpenGL games via Nvidia 3D Vision. AMD HD3D are also limited this way as native games usually don’t have 3D screen capture built into the game engines and AMD’s output isn’t being handled by a third party driver.

While it’s highly unlikely that others can credit an enhanced sex life to Doom 3 (read the beginning of the review to get the joke), it’s definitely a worthwhile investment for traditional 2D and stereoscopic 3D gamers. Even though the textures aren’t quite as advanced as what is readily available today, the graphics have held up very nicely, and it’s still plenty scary. The full length bonus mission and enhancements make the game a worthwhile buy for sure.

My hopes are high that Doom 3 BFG’s S-3D implementation will again be revisited when Palmer Luckey’s Oculus Rift SDK is released later this year. Until then, happy hunting, and if you’re sent to hell, keep the lights on…you’ll thank me later.

NOTE: Doom 3 BFG is temporarily listed as a DirectX 9 game in GameGrade3D.  It’s actually an OpenGL game, and will get recognized as such once a minior programming enhancement is made to GG3D.

How Memorable Is This Game
9/10