Have you ever worked in a dead-end office job where days last forever, and the work is unbearably monotonous?  I have.  It sucks!  With the exception of the words “go home” and “day off”, the coveted phrase of all office patrons everywhere is “there will be cake”.

Ah yes!  The office party.  The rare and legitimate excuse to stop whatever you are doing, and get your hourly wage for eating cake!  I will tell you this: that store-bought cake never tasted so good!  It was baked with love, I tell you!

So sets the premise of Portal by Valve.  Video game proof that we will do just about anything for that taste of cake!

You play Chell, a silent protagonist that has awakened in some type of laboratory.  Like a rat in a maze, your whole purpose in the game is to understand the environment around you, and figure out ways to get from one room to the next.  The main tool you use to do this is a portal gun that opens doorways in one wall, and exits in another.

It goes beyond that, though.  Portal capable walls also include floors,ceilings, and platforms.  The forces of gravity take hold too!  Jump from a high place into a portal, and you will blast through the other side.

You also have to manipulate the world around you.  You often have to jump on moving platforms, or weigh down buttons with cubes to open doors.  There are even plasma charges flying around, and you will need to find ways to project them onto special nodes to activate machinery.  Lots of fun!

Along your journey, you are prodded along by GLaDOS (Genetic Lifeform and Disk Operating System), a conflicted computer system that clearly doesn’t have your interests at heart, but is really trying to be nice about it.  Using “cake” as the cheese for the maze, GLaDOS understands the human psyche well – and you do indeed hope for some Duncan Hines around the bend!

While you will face death defying obstacles like poisonous sewage and child-voiced turret guns, I would classify Portal as a non-violent game.  It’s not that there isn’t any blood or gore (there isn’t), it’s that the purpose has very little to do with hurting or killing other characters.  In fact, all the characters are female, which suggests that the appeal for this game isn’t gender specific.

While I recognize that this game is a few years old now, I think the graphics are much too simple.  After you get through the main lab stage and move on to your escape, the environments begin to get visually interesting as you transition from a lab environment to more of an office environment.

It’s weird because the game plays out as a training exercise in how to use the Portal gun and handle different environmental situations.  When things get interesting and the real story is just seeming to unfold, the game ends abruptly!  On one hand, you are left wanting more, and on the other – the game seems unfinished.

To be fair, there are additional “advanced maps” you can play through outside the story line.  However, these are concept additions rather than added chapters for the story.  I think a stronger storyline with long term goals and ramifications would have worked very well for Portal.

So now the big question: how did Portal do in stereoscopic 3D?

Before I continue, Portal isn’t following our traditional review process.  Normally, we send all the driver developers an email at least seven days in advance so they know which titles we will be reviewing.  We do this so all developers have an equal shot at having positive results through driver and profile updates.  We didn’t do this for Portal because it’s an older game, and all the driver developers have active profiles in existence.  It didn’t seem necessary. 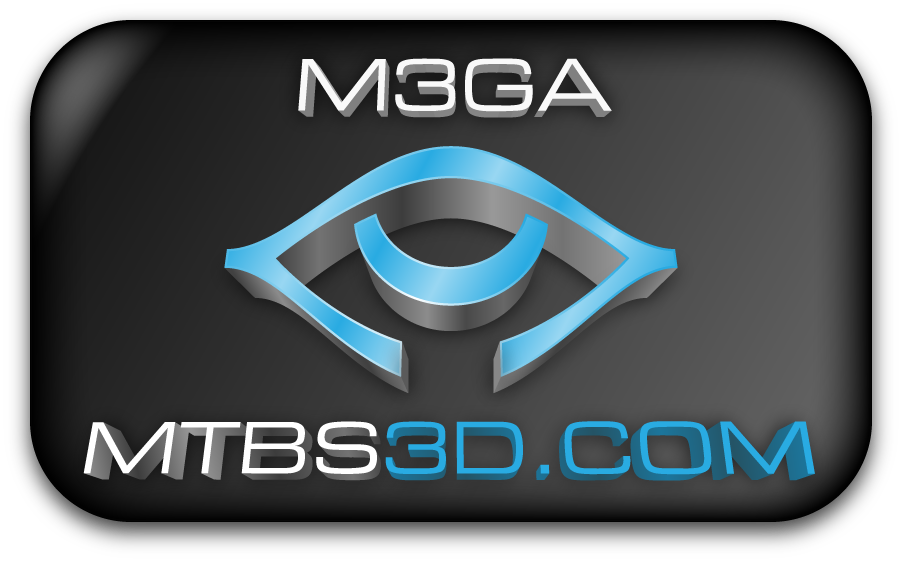 Our earlier scoring mechanism was subjective.  This time around, the stereoscopic 3D portion of the scores will be 100% determined by MTBS’ 3D Game Analyzer.  Let’s see how everyone did!

Readers will be pleased to know that Portal is very capable of having a combined depth and pop-out of experience, and the gun does not separate so much that it is uncomfortable.

The biggest trade-off worth mentioning is the requirement to turn off the bloom and HDR special effects which Nvidia recommends. There is also a minor anomaly around the glass windows where they seem to be offset from each other in the left and right eye behind the glass.

As far as stereoscopic 3D gaming experiences go, I have to say it’s really cool to jump down from high places and go flying through portals.  I’m also pleased to report that Nvidia’s dynamic crosshair works.  Instead of a laser-sight add-on, the in-game crosshair dynamically adjusts according to what is being aimed at in stereoscopic 3D mode.  This is a nice touch!

In other M3GA profiles, members have said that the crosshair doesn’t work with Portal, but I find my aiming has been spot on, and when I turn the dynamic crosshair off, it is clear that I am missing the target.

One of the benefits of older games is being able to use older technology!  An Nvidia 8800 series card or better should run Portal just fine.

While iZ3D had the advantage of supporting HDR and Bloom effects, it struggled with the portals themselves.  Many portals appear the way they should, while others are “black” or half filled and half black.  It’s as though the image inside the portal was sliding off the screen as the stereoscopic 3D images were being adjusted.

This was a new anomaly that was not catalogued in MTBS’ 3D GameAnalyzer, so we added it to the list and the scoring mechanism as a non-critical anomaly.

To prevent the gun from separating too much in combined depth and pop-out scenarios, the “simple stereo projection method” will work very well in the Portal profile.

DDD won the battle of the 3D bulge with Portal.  The portals work, the HDR and Bloom effects remain active, and advanced users are able to adjust the screen elements (gun, scene, sky) according to personal preferences.

If you are experiencing poor performance, this could be a hardware specific problem, as was the case with me.  Turn the anti-aliasing off, and that should solve the problem.  Similar to iZ3D, an ATI 3850 or Nvidia 8800 series card should work well in stereoscopic 3D.

Portal exemplifies how a game can still be fun despite having simple graphics compared to other modern titles.  While there are several bonus maps to play with, I would have preferred a much longer story campaign.  According to Steam, I finished the whole campaign in about six hours, so it’s not a case of time flying while having fun (though I did have fun).

Perhaps Portal’s biggest victory is its sharp witted script and non-violent nature.  I think our industry needs more mind sharpening games like this where it’s your brain that gets you from level to level, and not just the size of your gun.  Maybe similar to the way Chell was a rat in a maze, Portal was a social experiment to prepare us for the next great thing in gaming?

Check out the gallery of Portal stereoscopic 3D images, and share your remarks below.

How Memorable is This Game
7/10