Review: The Peanuts Movie in 3D

Good grief! My four year old son has reached the age of being able to behave and sit through a movie without having to pee. What better way to indoctrinate him in his father’s footsteps than to take him to see The Peanuts Movie in 3D?

For those unfamiliar (and really, I think there are people who are unfamiliar), Peanuts is a classic comic strip written by Charles M. Schulz. It began its run in 1950 and continued almost until the point of Schulz’s death in 2000. Peanuts’ central character is Charlie Brown, a warm hearted boy who tries and tries, but never seems to have success in the end. His sidekick is his infinitely cool beagle Snoopy and is further surrounded by a rich ensemble cast including Woodstock the bird (and Woodstock’s chirping friends), Peppermint Patty, Violet, Schroeder, Lucy, Linus, Pig-Pen, Franklin, Marcie, Sally, and more.

While the strip was first penned in the 50’s and was freshly written for decades, it stayed within that era where kids didn’t have gaming consoles, and playing outside with our friends around the block wasn’t such a foreign idea. Through the years, the comic expanded to animated specials and films, and for the first time since Schulz’s passing, we can finally enjoy Peanuts’ greatness on the big screen and in stereoscopic 3D.

The movie opens with what is arguably the happiest day for any ten year old during the school year…a snow day. Immediately, our memories are re-awakened with age-old themes like Charlie Brown desperately trying to get his kite off the ground…in the middle of winter, the kids skating around the rink with each giving a snippet of their character’s richness, and of course Snoopy being up to his high jinks.

Breaking the fourth wall, Charlie Brown reflects on his failed past which is shown as rapidly flashing black and white comic strips, and realizes that he now has a clean slate and vows to do things right and to be a success. With the arrival of the little red haired girl in class, Charlie Brown’s forever crush, the story is set. Can he work up the confidence to talk to her? Can he better himself to be worthy? Will he be a success?

It’s on this journey that we see Charlie Brown working to self-improve by going for Lucy’s five cent therapy session, reading War and Peace, learning to dance, and more.

Reflecting the complete opposite persona with unparalleled confidence, wit, and completely free of the chains of caring what others think, is his trusty dog Snoopy. He might be a beagle, others may treat him like a beagle, but he knows he is so much more. Joe Cool, dance instructor, top student, fighter pilot, spy…Snoopy does it all. Maybe that’s the point: Charlie Brown is more than he thinks he is, and Snoopy knows he is more, but it’s society that keeps him down.

Snoopy’s real story begins after being thrown out of the school classroom for pretending to be a student and landing in a trash bin. Perhaps a symbol of the times, Snoopy finds a working typewriter in the trash, takes it back to his doghouse, and starts typing “The Greatest Love Story of All Time”. In it, he is a World War I flying ace who is out to defeat his sworn enemy…The Red Baron. Flying his aerodynamic machine-gun armed doghouse with the help of his Woodstock-led support team, Snoopy is a force to be reckoned with. However, brave Snoopy is not immune to the ravages of love! He too has a crush on an imaginary pink poodle damsel in distress named Fifi (Fifi!).

What makes the Snoopy story even more endearing is it’s all in his mind and there is a wonderful sequence where we are seeing the story through Snoopy’s eyes and then through reality. I suspect it’s through imagination that the infinitely bright Snoopy can get through his day around us foolish humans.

Cinematically, the film was a joy in 3D. Scene after scene, they did creative things to keep it interesting – especially the Red Baron flight sequences with Snoopy and Woodstock. It was a great artistic choice to transform the Peanuts world into volumetric 3D for the film as it brought even more life to the movie. I have to admit that part of the joy was watching my four year old stretch his arms out to the screen and yell “Oh my goodness!!!”. Tired of the lackluster 3D conversions, we hadn’t seen a 3D movie in a long time, so we are glad we went to this one. 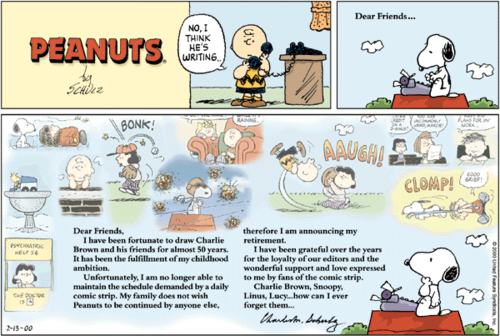 Shortly before Charles M. Shulz passed away, his last strip was a single panel letter explaining that he couldn’t continue, and his family didn’t want others to write in his place. I remember how sad and heartbroken I felt when I read that. This movie affected me more than I expected, and I think Shultz would be proud to know that the Peanuts Movie was written by Craig Shulz and Bryan Schulz. Craig Shulz is Charles Shulz’s son, and Bryan Shulz is his grandson. Bringing more magic from the past, the film’s Snoopy and Woodstock voices were sourced from Bill Melendez archival footage from earlier works.

Reflecting on the comic strips and earlier Peanuts films, I remember always feeling sad for Charlie Brown because things never worked out for him. He never got the girl, he never got the kite in the air, and he always fumbled with something no matter how well planned and practiced he was. Completing the story in a way their predecessor didn’t, The Peanuts Move is a welcome take on the value of Charlie Brown and why it’s important to try and try again no matter the outcome.