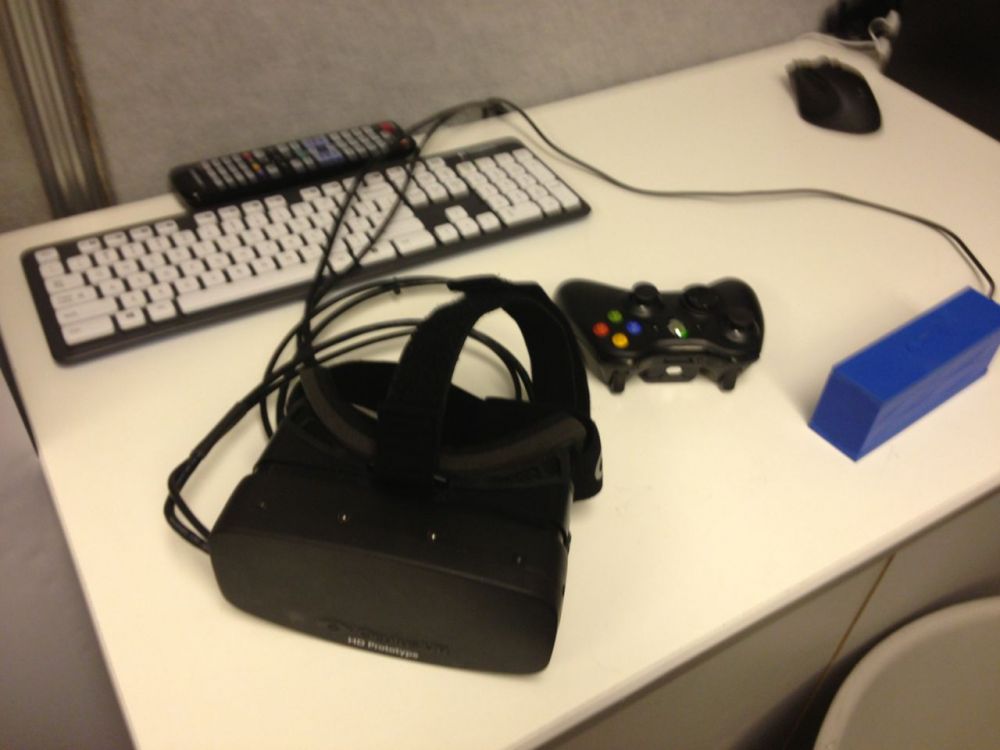 I stayed an extra day at E3 and am really glad I did because in the afternoon Jim Redner was able to get into the Oculus meeting room to see the HD Rift prototype first hand. I really appreciate getting the opportunity to check it out in spite of how obviously saturated the whole team’s schedule was. Even though the Oculus booth was up away from the main exhibit hall and everything was being shown behind closed doors, it was obvious from all the people hanging out and trying to talk their way in that this was a hot spot. 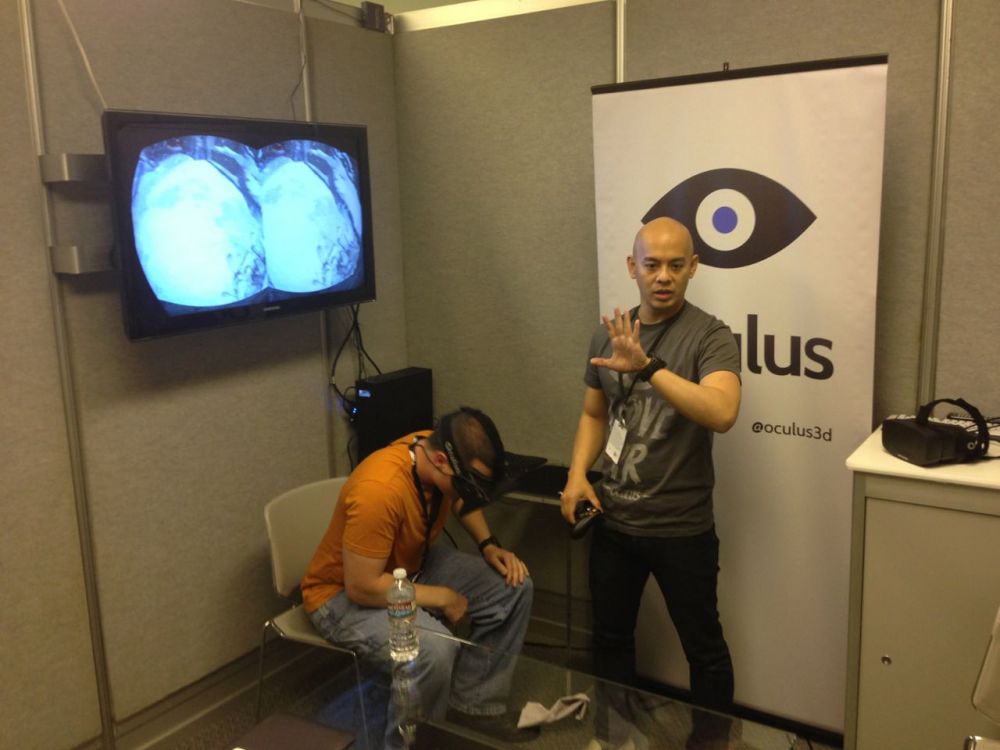 Joseph Chen was the product manager who went through the demo, showing both the familiar current Oculus Rift Devkit and the new HD prototype. The other people in the group I was with were all new and seeing the Rift for the first time – overall their response to the regular Rift was overwhelmingly positive. Switching to the HD version, they were blown away. For me, I was chomping at the bit to see the prototype since I’m already very comfortable with the normal devkit and really wanted to see what it was like with more pixels! 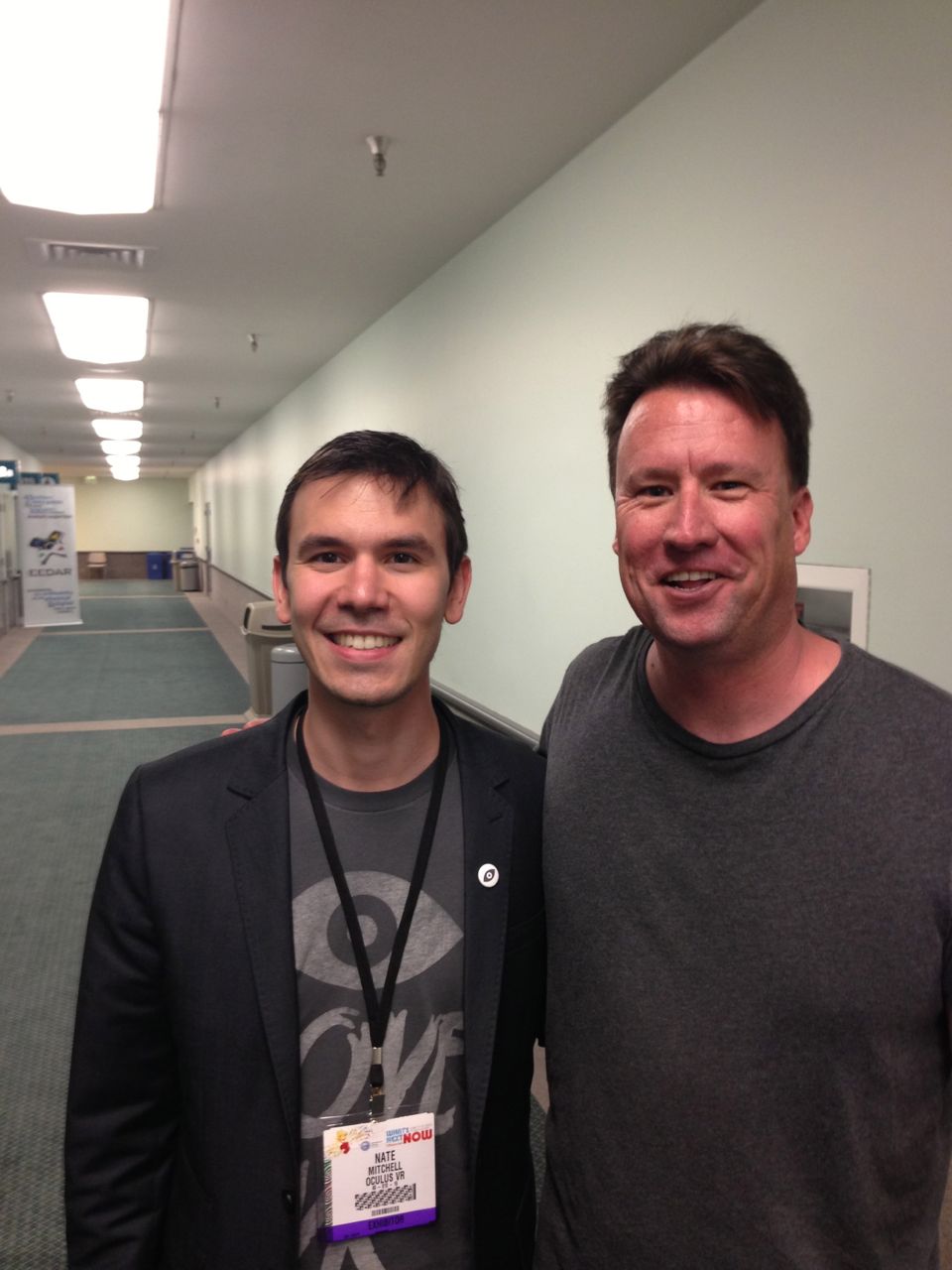 It did not disappoint.

Sure, there is clearly still room for improvement with resolution and I fully expect that as the pixel density goes up we will have other trade offs with artifacts and rendering, but the step up from 1280×800 to 1920×1080 – with each eye getting 960×1080 is an obvious improvement. I think it will need to go up another level or two before the screen door effect is totally eliminated but this prototype display shows how much better even a relatively small resolution increase can help. Like everyone else, I’m really excited to see what level the equipment gets to for the first consumer models.

Talking briefly to Brenadn Irbe and Nate Mitchell after the demo it sounded like this has been a great E3 for them, with overwhelming interest from press, developers, publishers and the general gaming public. From their point of view, its awesome to see the difference just a single year has made since the initial Rift prototypes, through the launch of the devkit, and now looking forward to further improvements with this HD prototype and beyond.

We asked Kris if he noticed any motion blur similar to the first SDK, and he couldn’t give an answer on it.  He wasn’t looking for it, so it’s probably a good sign that it wasn’t an obvious artifact!