The Story of Project Holodeck

Project Holodeck is a virtual reality platform designed to make effective VR experiences affordable and possible with readily available off the shelf parts and components.  Their goal is to bring 360-degree full-body virtual reality out of the research lab and into a fun, accessible consumer gaming platform.

Sharing their story and announcing their latest software release is James Iliff, Producer at Project Holodeck and member of the leadership team.

The Moment of Conception 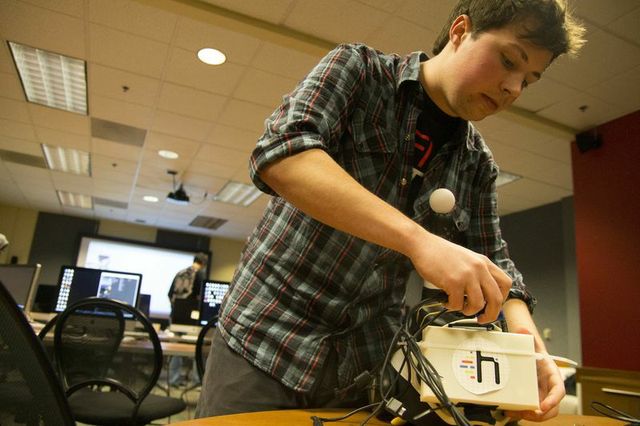 Project Holodeck got started back in March 2012 at the IEEE Virtual Reality conference.  I was visiting there with Nathan Burba and Palmer Luckey as part of the Mixed Reality Lab’s exhibit, and at the time Nate was presenting a research paper on motion tracking and Palmer was working with the Lab on their head-mounted displays.

Palmer, Nate, and I found ourselves riding in a limo with some famous researches to go check out a telepresence demonstration, and then we realized something:  What if we could get 90% of the VR immersion that you find in a research lab, for 1% of the cost?  We had been working with virtual reality installations for some time, and they were amazing – you could cover your entire body with motion capture markers and achieve full avatar embodiment in a virtual world.  Military-grade HMDs were expensive but had incredible field-of-view.  But few people had access to this experience but researchers at the top of their field and the occasional lucky intern.  Why did it have to be that way? We wanted take this incredible VR experience and do two things:  Make games for it, and make it cheap.

Then Project Holodeck was born.  Palmer had been working on his own HMD for quite some time, and he had numerous iterations (called PR1 – PR4, and others).  His new HMD was made with cheaper components, and we could combine it with consumer-facing motion tracking controllers to have a fully embodied VR play space, not unlike the concept of the Holodeck from The Next Generation!

We instantly started brainstorming all the possibilities.  A zombie apocalypse, an interstellar travel simulator, a pirate ship battle!  A steampunk-style airship game sounded perfect, because players could interact in a 20’ by 20’ play space that would be represented as the ship deck in the virtual world, while at the same time they could fly around in a massive environment and explore.  This idea of micro / macro space got around the spatial limitation problem.

The ship deck could have cannons, a helm, altimeter, machine guns, afterburners, and all kinds of gadgets.  Players could frantically run around using various instruments and weapons, while having cannon balls and bullets whiz past their heads from enemy ships.  And it all happens hundreds of feet in the air, which is particularly titillating in virtual reality.

This is how our Wild Skies project began – the first game for Project Holodeck.