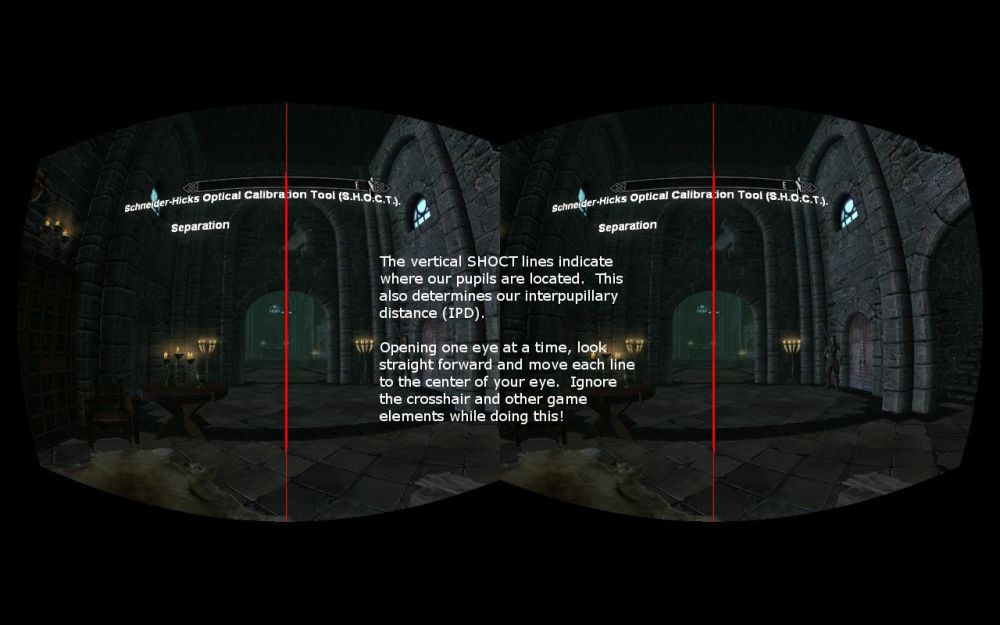 In “Separation” mode, two vertical lines will appear; one for each lens. While looking straight ahead, open one eye at a time, and move each red line to the dead center of each of your eyes.  Use CTRL-O and CTRL-P to control the left line, use CTRL-K and CTRL-L to control the right.  While estimating the location according to what you see, ignore the game’s crosshair and HUD because this may not actually be perfectly centered on each of your eyes.

Now that the SHOCT lines are properly set, we have the information we need to determine the best and most effective settings for your VR gaming experience! 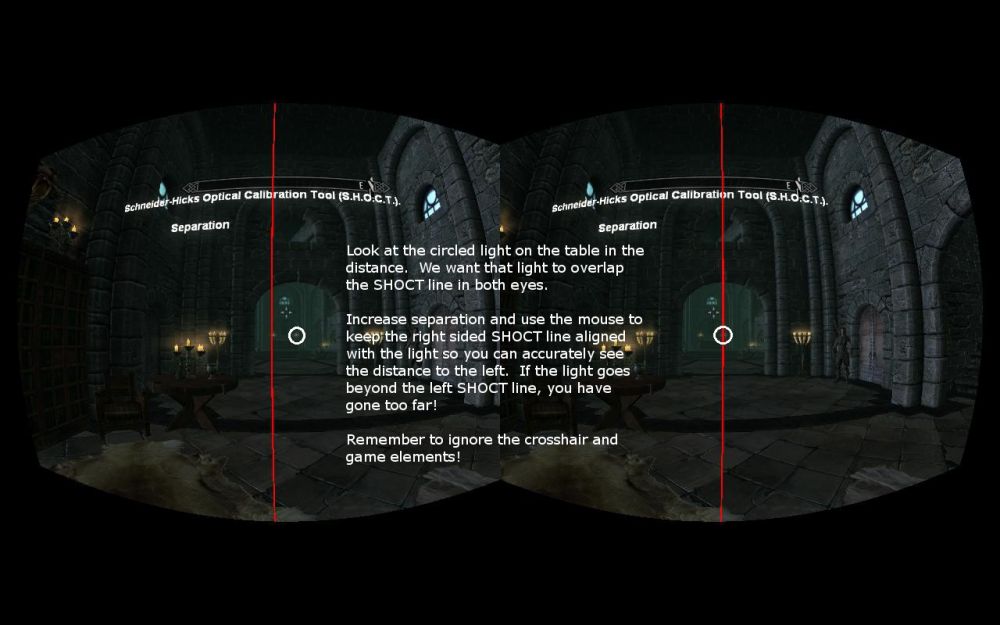 Open JUST your right eye, and overlap the SHOCT line over a far steeple or the edge of a distant building. Don’t move your mouse or head tracking once this is achieved!

As you are increasing or reducing the separation, you will need to reposition the right SHOCT line on the object so you are getting an accurate measure between the left and right view.

Hit CTRL-I until the SHOCT lines are turned off. If the imagery is still uncomfortable to view, don’t panic because we haven’t finished yet!

HINT: If you are using an Oculus Rift, you can set your computer up to have the left/right view appear on your computer monitor at the same time as your HMD. After the SHOCT lines are set, they can be used as a reference point. Thanks to this calibration technique, you can easily see if the objects are properly placed even without wearing the Rift!

Even though the separation is set, the game can still be uncomfortable to play if our convergence isn’t properly adjusted. Have your game character walk to a corner of a wall or table. It’s important that the object is easily viewable in the center of the screen. 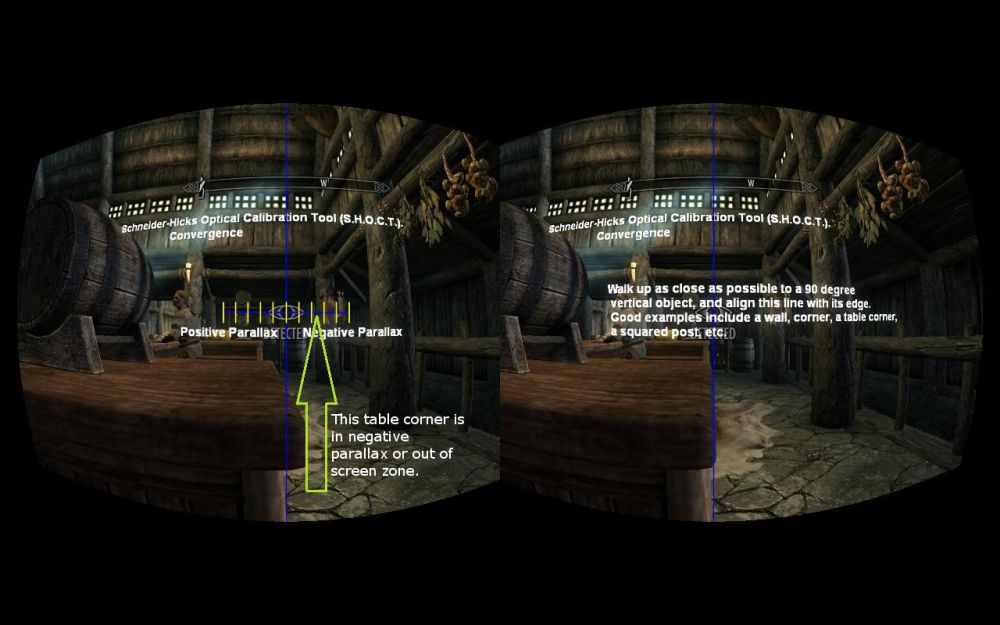 Reasonable convergence setting for an HMD.

Press CTRL-I until you are in “Convergence” mode.  There will be a blue SHOCT line in each eye.  The right eye is a single vertical line, while the left has a vertical line, plus horizontal markers.

Do your best to find a vertical object standing at a 90 degree angle.  The corner of a wall or table is best.  Align the SHOCT line in the right eye flush against the object’s edge.  Now looking at the left eye, you will see where the object’s edge is relative to the 0 parallax line.  While we recommend trying to set this to 0 parallax, it could also be attractive to set this to negative one or two basis points.  You will have to experiment with each game.  Remember that positive convergence means into the screen, and negative convergence brings things out.  With an HMD, it’s recommended to be modest with the negative convergence.

HINT: Thanks to the convergence SHOCT lines, you can take your HMD off so you can see what is happening and make more accurate adjustments.  As you are setting convergence, you will need to regularly realign the right eye with the SHOCT line! 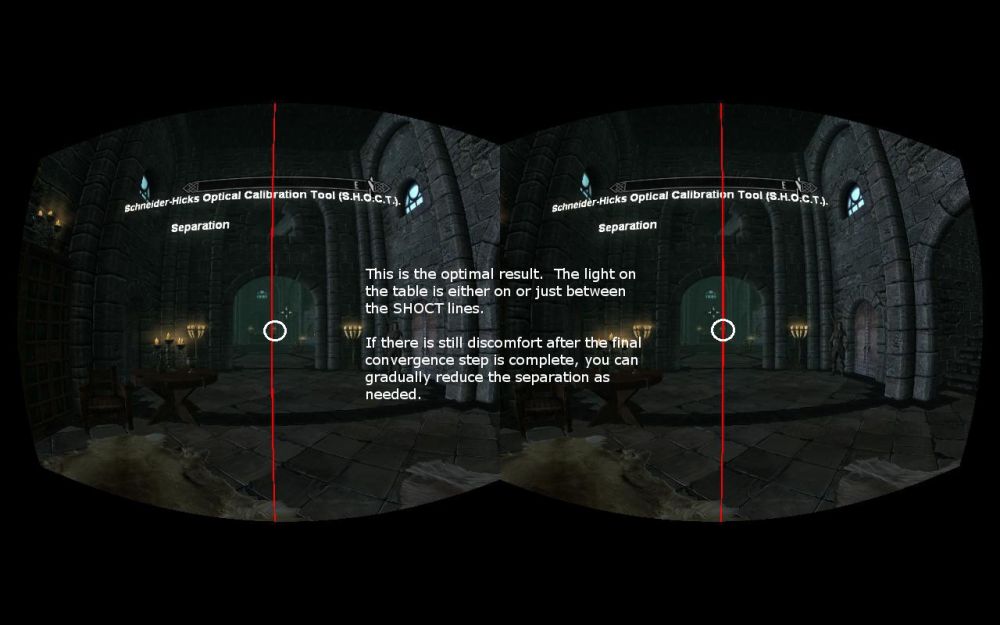 Turn the SHOCT lines on again by hitting CTRL-I. Choose an object in the far distance, and again adjust the separation so the same object in each respective lens is overlapped by a SHOCT line.

Again, walk to the table or wall corner and make sure it is converged as you intended. This is just a precaution as it’s unlikely you will have to readjust this.

If there is any remaining discomfort, gradually reduce the separation setting.  Using your eyes shouldn’t be painful, so don’t try to force things!  When in doubt, turn the SHOCT on to quickly check that the separation of distant objects are in line with what your eyes are accustomed to.  Game environments and camera views can change, so be prepared to re-adjust and compensate.