In the final part of our GDC 2013 coverage, Kris Roberts checks out (and grabs hold of) the coolest things on the show floor for the VR and AR enthusiast!

Without a doubt the biggest draw on the GDC Expo floor this year was the Oculus booth. They had stations set up for people to try out several demos running on the Rift, and people were queued up in a holding pen eagerly waiting to try it for themselves. The line was long every time I went by, and I heard that it generally took at least an hour to get to the front of the line.

For me, the biggest surprise I found was a haptic feedback controller developed by William Provancher at the University of Utah in the Haptics and Embedded Mechanics Laboratory.

Described as a motion-based game controller with “Reactive Grip” touch feedback, their prototype device does a shockingly good job of conveying motion and force information from in game objects into your hand.

The handle has four shafts which are articulated by motors within the device to provide the feedback. They can move in/out and up/down – and honestly I was almost a little freaked out by how well it worked. The demo unit at the show was using a Razer Hydra for its motion tracking, but the tactile feedback system is tracking agnostic; Will talked about using it with the Microsoft Kinect and Sony Move as well. 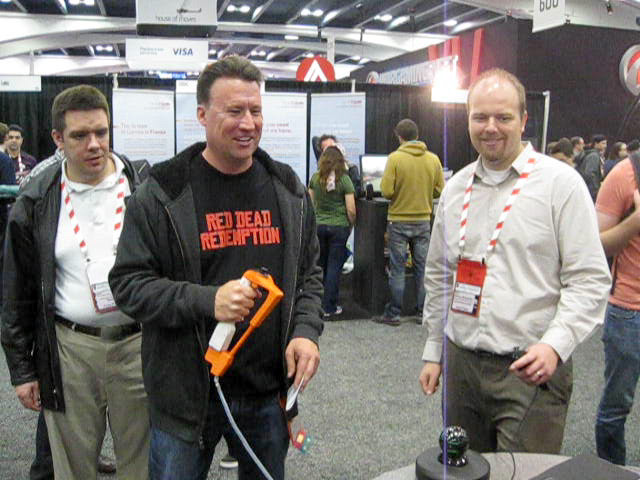 Kris Roberts trying it out!

To demonstrate the technology, they had several simple simulations setup where the player input would switch between a sword, a pistol, automatic rifle, and finally (and the best in my opinion) a swinging chain and ball mace! Even though there was no force feedback, in the sense of restricting movement of the controller, the feedback through the handle of the force and momentum of the swinging weight was really convincing – particularly when you hit virtual objects with it. Most of all, it was fun to play with – and everyone I watched experiment with it looked like they were having a good time.

Both Qualcomm and Unity3D had demos set up showing off augmented reality developer tools. The SDK from Qualcomm is called Vuforia and supports both iOS and Android, and the Unity3D support makes implementing it very easy. One of the biggest pieces their system helps you with is creating the targets used by the device to lock on to – you can use pretty much any type of image you like and they do the heavy lifting in terms of finding the key points and handling the tracking. On the Unity3D side, you can replace the typical First Person Controller with an AR View and get augmented reality working pretty quickly either from scratch or in apps you are already developing.

The Brainwave Starter Kit from NeuroSky is a headset that acts as an inexpensive EEG and actually detects your brain waves as an input device. This year they had a pavilion set up with several different applications which have been developed to work with their device. The demos promised to let you “throw trucks with your mind!” or pilot a real miniature helicopter. In practice, and maybe because the show floor is hectic, loud and chaotic, I never got the piece of mind to really feel like it was working for me. Other people did seem like they were having fun, and there is something neat about mind control, but its not quite the science fiction gadget one might imagine. The device does not “read your mind” in any real way, it can not tell what you are thinking. What it does measure is relative levels of attention and relaxation, and that’s what it reports to the computer for developers to use as input.

GDC 2013 was clearly the year for virtual reality. The Oculus Rift devkits shipped while the conference was happening, and many game developers are clearly excited about seeing what they can do with it and how they can bring players into their games like never before. It is interesting to see the contrast however between this year and last with respect to what I suppose could now be considered more conventional stereoscopic 3D games.

Last year represented a high watermark for sessions that included content on developing stereoscopic games: Nintendo, Naughty Dog and Sony all presented talks including the technical, artistic and design perspectives. Exhibitors were showing innovation with 3D workstations, 3DS titles, location based 3D entertainment centers and gesture recognition. I’m sure much of those efforts are ongoing, but there was not as much represented this year at GDC.

Stereoscopy is obviously a major component of VR and developers who already have experience working on 3D content are in a good position to forge on into exploring the other aspects of immersive gameplay. It will also be interesting to see what the player willingness is like in embracing the new technology when consumer equipment becomes available. For years we’ve been hearing that some people are interested in 3D, but would prefer it without the glasses – but now the somewhat bulkier and heavier goggles may become the gateway to new gaming experiences we’ve never had before. Talk about irony!

Special thanks to Kris Roberts for making this GDC report possible!  If you have an event coming up that you’d like MTBS to cover, please email press@mtbs3D.com.