With the resurgence of interest in VR and augmented reality devices, it’s timely that we are sharing a write-up about the Novint Falcon. I had seen one years ago at CES, but it didn’t really click as to what it is until one of our members shared its praises with me. After a quick email exchange, Novint shipped one over, and now I can share the results!

Haptics refers to the sense of touch. Texture is one form of haptics, but it can also refer to recognizing shapes and the make-up of objects without the benefit of sight. The Novint Falcon is a mouse replacement that adds real haptics to games so that you can experience what you are playing in new and interesting ways.

The device almost looks like a friendly robot with three protruding arms that meet at a single juncture. The juncture is where your hand interface is placed. The interface is either a sphere with buttons or a gun mount – your choice!  The gun mount tends to be the most popular, and they did a good job with the trigger and extra button placements.  The only thing missing is a scroll wheel, so you will need to use a keyboard alternative.

The device is a hybrid of plastic and metal, and the frame is put together to last. The fact is, when those shells come flying and your gun starts shaking and flapping left, right, and center, the Falcon has to be able to take what it dishes, and I think it’s reasonably well constructed with this in mind. The paint on the plastic components might be a little dinged here and there – even when brand new – but the mechanics frame are built to last. The unit requires its own brick power supply, and connects via USB connector.

Unlike a mouse that is limited to horizontal movement on a flat surface, the Falcon has six degrees of movement on the X, Y, and Z axis. Together with a keyboard, most games work best by using the Falcon as a vertical plane interface in place of a traditional mouse. In some instances, games can effectively use the Z axis by translating pushing in and out as forward and reverse movement in the game. I don’t have enough experience with this yet, but it can be done.

Now separate from haptics, you are probably wondering why anyone would want to have a vertical interface like this. What possible advantage could it have over a mouse?

The one limitation a mouse has is that you have a limited window of movement space before you have to lift the mouse and put it back on the table so you can move your pointer some more in a given direction. Sure, you can use mouse accelerators, but there will always be that physical hurdle.

The Novint Falcon gets around this problem by dividing movement in two windowed phases. Your first window of movement is in the center, and it’s here that you can freely move and accurately aim. When you go to the outreaches of the space, you are in the “push” frame, and the software will automatically bump your movement at an accelerated rate to where you want to be. No more mouse lifting! 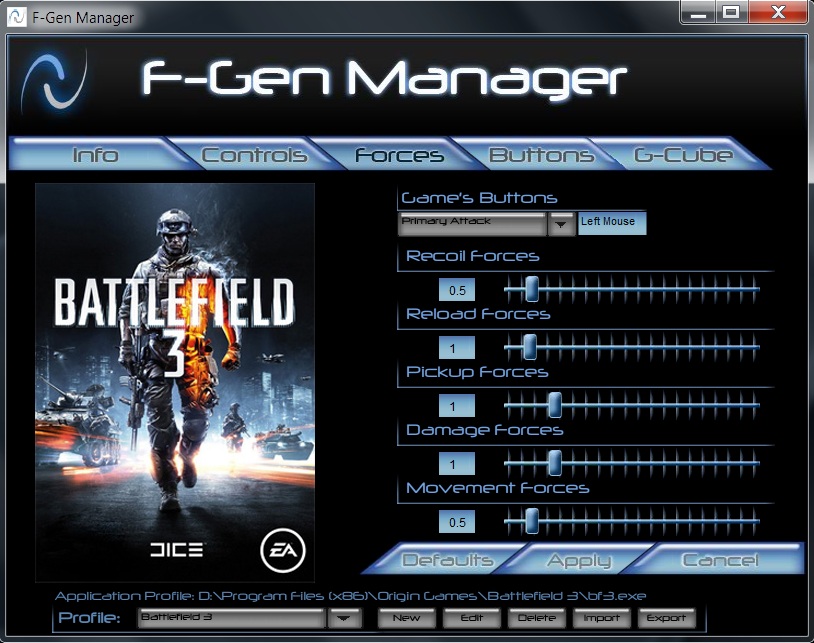 The best part is you can customize the sensitivity, how fast things will move as you bump the edges of the space, and even how wide, high, and deep the environmental spaces are for personal comfort on a game by game basis. You can even adjust for the stiffness and “feel” for each individual title.

Another benefit is while we have been using the mouse for decades, it really does make more sense to aim on the vertical plan as we would in real life, and the Falcon lets us do that. There are some things to be aware of, though, and I’ll get to that a little later.

The arms are supported by hidden servo motors. As described earlier, these motors determine how stiff or loose the interface will feel, it shapes the movement area you have to work with, and it passes on the game’s environmental information to your hand. The haptic feedback could be as minor as feeling little nudges as you jump on a hill, to having your gun forced backwards after firing off a trusty grenade launcher. There is almost no limit to what a programmer’s imagination can deliver.

I think that some of the unit’s strongest work is shown off in the technology demo. When a pitcher throws a ball, you not only catch it in your glove, you feel the ball hit the center of the catcher’s mitt…hard! When you are presented a series of textured spheres made of ice, sand, molasses, and more, you feel the ease and difficulty of running the pointer along and through (or not through!) the different curved surfaces. Really innovative stuff!

For a gamer, this isn’t a vibrating joystick. It’s a dynamic experience that recognizes damage, recoil, directions of incoming and outgoing forces, and more. It’s not something that is just turned on and off, and is instead an artistic tool that is shaped and textured in three dimensions. I’ll share some gaming examples later in this review.

The Novint Falcon’s core technology hasn’t changed very much since launch, and it’s probably a wonder why we are giving it this article space so late in the game. Similar to stereoscopic 3D gaming, the Novint Falcon was going without because the game developers refused to program for it until there was a firm install base. Let’s face it; game developers aren’t always the innovators we’d like them to be, and even when they do step forward, they don’t always get it right.

For this reason, the Novint Falcon only had a handful of games supporting it, and for all intensive purposes, it was becoming a glorified haptics paperweight. Thankfully, similar to stereoscopic 3D drivers on PC, Novint’s solution was to come up with a software alternative that was no longer dependent on game developer involvement.

Fully released and regularly updated since 2010, the F-Gen Manager is Novint’s answer to stereoscopic 3D drivers. As games are released, Novint creates customized profiles for each title. While the game is played, F-Gen reads the memory registers to determine when certain actions are happening, and translates them into real haptics feedback. According to JohnT at Novint, while custom game development would be helpful in certain ways, the F-Gen profiles are just as good – it’s just that they take extra time to develop.

As with the 3D interface, gamers have a great deal of flexibility in how the haptics are delivered. You can control the intensity of gun recoil, movement forces, the sensations of incoming damage, reload, and more.

According to Novint’s site, there are about a hundred games supported, and the library is growing on a regular basis. Some of the big ones are Elder Scroll V: Skrim, the Battlefield series, the Call of Duty series, Borderlands 2, and more. So does Novint deliver?

A pleasant surprise with the Novint Falcon is that even though their support is primarily from third party drivers rather than natively written in the games themselves, they manage to maintain a sense of haptics creativity, and very little seems generic.

With Left4Dead 2, each gun has its own recoil depending on what is being fired and reloaded, and when you swing a club, sword, or axe, the Falcon makes you feel the swing as it’s taking place.

With Skyrim, on top of the weapon swings, you also feel the sensations of firing bolts of lighting or streams of fire – and each spell feels a bit different. These experiences are carefully crafted, and it’s understandable that profile development is time consuming because it’s not just about turning something on at the right moment; each sensation has to be custom designed.

Portal 2 was neat because not only do you have a portal gun to fire, there are also some sensations for picking things up and moving them around. It was a nice touch.

Haptics are about more than what you feel when you fire your weapons and cast spells. There are also directional nudges from incoming fire and damage, as well as their level of intensity. Several FPS shooter profiles have this including Call of Duty: Black Ops 2 and Battlefield 3. In most cases, you seriously feel it when you’re taking damage, and you usually have a pretty good idea from where. BF3 even has a sensation for going through the healing process so you know what your health is at without looking at the indicator – very creative!

The only caveat with their game compatibility is when a game gets patched, there is always a chance that the Novint Profile will fail and need to get refreshed. For example, I’ve been re-enjoying Battlefield 3 with the Falcon, and with a quick patch from DICE, all the force feedback disappeared. You have to be prepared for this once in awhile, though profile updates are worth the wait. It’s really a lot of fun.

How To Avoid Throwing Your Falcon Across The Room

Now before you all go out and buy yourself a Novint Falcon, you need to go in with the right attitude and avoid the mistakes I made when getting started.

First, make sure you are gaming with a chair that has arm rests. If you don’t have arm rests, you are wasting your time because your arm will gradually get tired, your aim will be very sloppy, and you’re going to be very, very frustrated wondering what the heck you are doing wrong.  Also, try to fight the urge to get too close to the screen.  The Falcon arms need enough leeway to pick up your movements, and if you scrunch them up too much, you are going to suddenly get restricted in your game.

Next, while I don’t recommend playing with the interface settings, don’t be shy about turning down the haptics “force” settings. Start low, and work your way up. For me, the start-up settings were so high, I was too busy fighting the recoil before I could even aim properly. It’s almost like lifting weights: heavy at first, but once you get used to it, you can tolerate a lot more and will be more comfortable with the higher settings.

Finally, be prepared to invest the time. The truth is that almost from birth (for some of us) we have all grown up using mice, and the Falcon is a completely different experience. I’m not 100% convinced about Novint’s claim that the Falcon is more accurate than a mouse, but I’m certain my game is growing more and more competitive as I use the Falcon. I have to agree with Novint that you may need a good forty hours before you’re nearly as effective as you are with the mouse – it will take time. 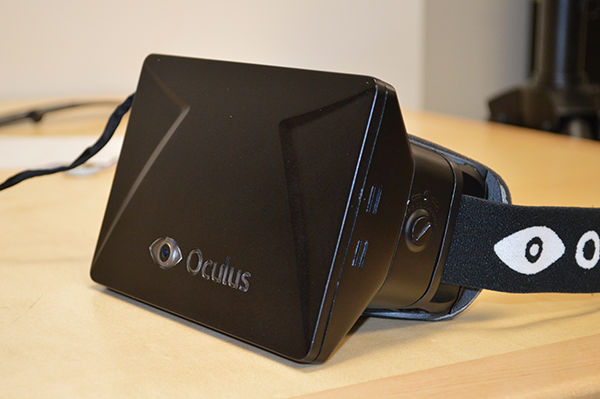 Much like our head and hands behave as separate entities, could the two devices mix like chocolate and peanut butter? If there is an imaginative game developer out there willing to build the ultimate VR experience…this could happen!

In the meantime, this is a recommended purchase for gamers looking to shake things up a bit. It’s an even bigger bonus for stereoscopic 3D gamers. The Novint Falcon is easy to install, the software library is growing, and it makes for some memorable gaming. Just be prepared to invest the time, and you’ll enjoy the ride!