Last week, MTBS was flown down for a personal tour of Dolby Laboratories’ headquarters in San Francisco, and their latest offerings in stereoscopic 3D cinema and 7.1 surround sound.  Dolby Labs has been a solid name in the consumer and cinema space for over forty years, and similar to visiting Willy Wonka’s chocolate factory, it was a fascinating exercise to grasp what Dolby’s role is in making the magic of cinema and home entertainment possible. 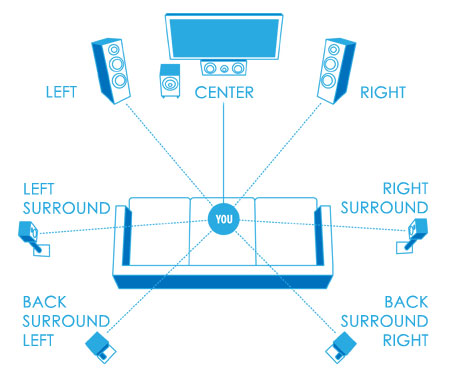 Dolby’s second offering is their stereoscopic 3D cinema solution.  We have seen this introduced on MTBS before, and the idea is that there is a rotating color wheel in front of the projector that divides the left and right view.  With a limited relationship to anaglyph, the left and right view are quickly color shifted by this wheel, and the glasses filter the views to each of your eyes.   The system originally belonged to Infitec, and has been licensed by Dolby for some time.

The big advantages of the Dolby 3D solution are that it doesn’t require an expensive silver screen like polarized options and the glasses can be washed and reused hundreds of times.  The system is also bought outright rather than leased.  It is claimed that the Dolby solution is brighter than the other options, but I’m not in a position to confirm or deny.

I have to make it clear that while Dolby 3D is based on color shifting, it should NOT be confused with anaglyph glasses that feature yucky red/blue results.  This is a full color solution, with each glasses lens featuring no less than fifty layers of filters to make the technology work.  When Dolby 3D was first introduced a few years ago, it was heavily criticized because the glasses were indeed made of glass, and cost as much as $50 a pair.  That’s a lot of moola to lose if patrons forget to return the valuable specs.

Dolby’s new glasses are made by 3M and include a security device to stop forgetfulness in its tracks.  More importantly, now that the lenses are made with plastic film rather than glass, each pair of Dolby 3D glasses is only $12 a piece, and not $50.  That is a definite plus for nervous exhibitors worried about losing money from accidental theft.

The centrepiece of the Dolby Laboratories visit was their headquarters’ screening room.  Dolby is considered the foremost authority on sound, and to play the part, they have a special screening theater to ensure that film audio is nothing less than perfect.  On one hand, it’s designed to be a standardized screening room, and on the other, it’s made to be tinkered and fiddled with for audio experimentation.

What makes the theater work is its attention to silence.  The theater’s foundation is a floating floor which is two layers of cement with rubber insulation pucks in-between.  The walls and ceiling are equally well sealed by having two wall layers on all ends so there is no real connection to the outside world.  Even the ventilation is pumped in and out of the room in a special way so that it is unusually quiet.  When the ventilation was turned off, the room grew even quieter.

Unfortunately, if you are ever in that room, you better hope that a movie is playing because it is far too easy for everyone to hear your stomach talk.  I was a little embarrassed by this…but I quickly learned that other digestive tracts were equally communicative!

After the welcome dinner, the first stop was a film expert panel about the impact of 7.1 Surround Sound and 3D.  Featured speakers included:

While there was a lot of talk about Dolby Surround and how 3D impacted their movies, it’s the stories and anecdotes I found most entertaining.

First was Erik Aadahl, who talked about their experience getting 7.1 and 3D to work with Transformers 3.  One of the big things when it comes to audio engineering is that you often need to come up with sound effects that don’t exist in real life.  One effect they wanted to create was based on the sound that a baboon makes.

With the help of a trainer, they brought a baboon in to capture some sounds.  Unfortunately, he just wasn’t in the mood to talk.  So, the trainer had an idea and asked for Erik to put his car keys on the floor behind him.  After Erik put the keys down, the baboon looked at this exercise with great interest.

The trainer then instructed Erik that no matter what he does, to not react.  Without warning, the trainer took the keys from behind Erik, and walked away.  Watching the injustice of Erik’s keys getting stolen, the baboon suddenly got vocal, and tried to tell Erik that the trainer walked away with his keys!  This good Samaritan baboon is what Shockwave/Driller’s sound effects were based on.

On the topic of 3D, we wondered if there was a relationship between how audio is perceived in stereoscopic 3D versus traditional 2D.  According to Erik, the Transformers Dark of the Moon soundtrack was originally mixed on standard 2D screens, but had to be remixed for 3D.  The reason is that when we are watching a 3D movie, our eyes look at the screen differently than we would with a 2D space.  For example, we may focus or glance at parts of the screen we otherwise wouldn’t.  For this reason, the audio mixing may not make sense the same way, and has to be compensated accordingly.

Kinson Tsang’s film was shot with 7.1 and is a Kung Fu superhero movie taking place in the early 30s.  A mix of nostalgia and over-the-top martial arts heroics, it was an entertaining film that gave a fun spin to an otherwise well established genre.  With all the fists, feet, knives, and sticks flying, we wondered if this film would have worked well in stereoscopic 3D.  Kinson chuckled a bit when he thought about the prospect, and remarked that the shooting style would have to be very different.  In particular, the scenes would have to be drawn out more so viewers could catch all the action.  One tidbit that came out of the discussions was that the film’s post production was handled in six weeks, and is close to standard for this kind of film.  While Legend of the Fist was no Avatar, it’s fascinating that they can get a movie drummed out that quickly.

Another thing that came out were the complexities of Chinese cinema.  Each actor spoke their own dialect because nobody wanted to pretend to speak in something that wasn’t their native tongue.  This would have been too unnatural and difficult.  The result was the actors were effectively speaking different languages in the same film, and the movie had to get dubbed for different dialect audiences – even in China!

Finally, and I thought this was interesting, each action star often likes to have their own distinct punching sound.  So the next time you watch a Jackie Chan movie, listen carefully to hear how his punches and kicks sound compared to the other fighters.  As Kinson described it, the audio could be as much of an actor’s trademark as their moves.  Kapow!

Michael Semanick had the misfortune of being questioned about the purported demise of 3D in cinema, and that there has been a steep decline in 3D ticket sales compared to traditional 2D theaters.  Paraphrasing for Michael, he remarked that maybe audiences are growing used to the effect, and that it doesn’t carry the same weight as before.  He didn’t seem prepared for the question.

Eric Brevig quickly interjected, and pointed out that there are a lot more movies in 3D now, and each film is fighting for viewing space in the limited number of available 3D theaters.  It’s interesting to note that of the three 3D filmmakers on the panel, none of them have put out a 100% 2D/3D conversion like many of the 3D flops that have hit theaters recently.  When I got the opportunity to privately ask Eric about 2D/3D conversion, he immediately admitted that it’s a problem.  He explained that poor conversions have undermined the 3D industry compared to the properly created dual camera 3D productions.  However, this isn’t a case where conversion itself is to blame – it’s rushed to release conversions.  For example, he explained that he knows the guys doing Titanic 3D, and said that they wouldn’t release something that was subpar.

I had trouble finding a linkage between Rohan Sippy and 3D, though his film was shot with 7.1 surround sound.  His fictional film focused on a real drug trade in Goa, India and followed several independent stories that revolved around an airport incident.  We got to screen the film, and being the first Bollywood movie I have seen from beginning to end, I was entertained.

I would say that Dum Maaro Dum bordered on being India’s The Usual Suspects, with Michael Barbosa being Goa’s Keyser Söze.  However, I have to say that it was a culture shock to see this entertaining thriller being broken up with unexpected music videos and raps.  For example, there was a scene where the vice-squad leader had a music sequence that had an uncanny resemblance to George Michael’s “Outside” music video.  You have to see it to get it.

Rohan Sippy confirmed that these musical numbers are 100% expected by Bollywood viewers and is an important part of the entertainment factor.  I can relate because during the movie, a tenured Bollywood fan was snapping his fingers and clapping during the movie behind me.  It was really something else to see how the design of the movie can successfully be radically different than what we usually see here in North America.  I’m not talking about just the language, the actual fabric of how a movie is made for the masses.  I’m not saying it would work here, but it definitely works there.

Could you imagine what Transformers Dark of the Moon would be like if during a pivotal action moment, Optimus Prime suddenly broke into song?  Or if Megatron held hands with Starscream and ran into the sunset?  I kid you not when I say that I think T3 would have been more enjoyable the second time around…for close to three hours.  Though I still would have wanted Rosie Huntington-Whiteley out of the film!

We have much more to share from Dolby Surrounded!  More to come tomorrow.