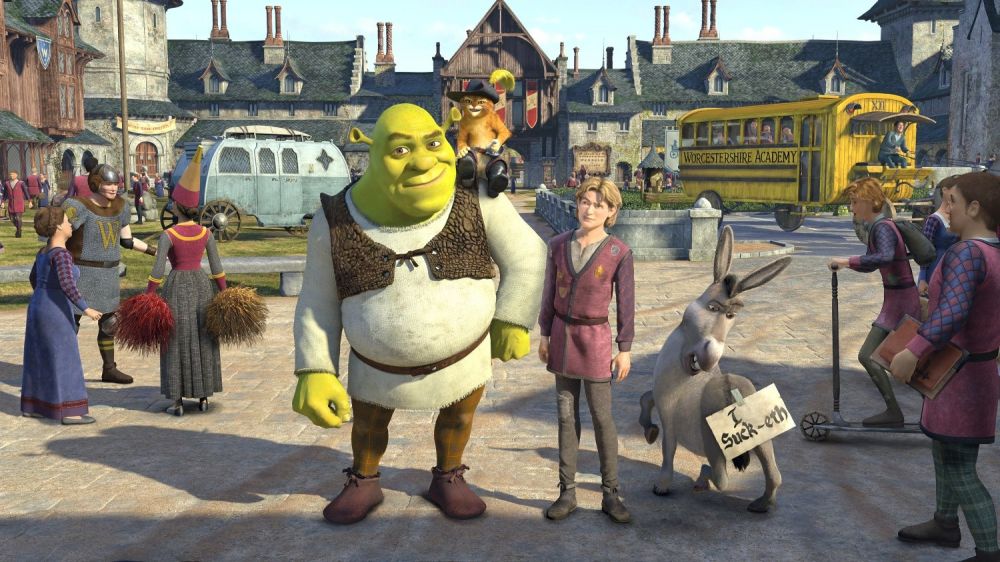 “Shrek Forever After” is the fourth and final instalment from the Shrek franchise, and the series’ first movie to be shown in stereoscopic 3D.

Time flies when you are having fun! Shrek’s journey began in 2001 with an unconventional and amalgamated take on children’s fairy tale stories. Shrek (Mike Myers) was the feared ogre that lived in a swamp and with the help of a smart-mouthed donkey (Eddie Murphy), he saved his half-human, half-ogre better half, Princess Fiona (Cameron Diaz). After being kissed by Shrek (her “one true love”), the curse was broken, and Fiona became a full time ogre, and lived happily ever after with Shrek. Or so we thought.

In 2004’s “Shrek 2” , Shrek had to fight off Prince Charming and his magical mom to keep Fiona. This also marked the introduction of Pussin Boots (hilariously voiced by Antonio Banderas).

“Shrek The Third” was released in 2007. A vengeful Prince Charming brought together several fairy tale villains to help him capture the kingdom of Far Far Away. With order restored, Shrek and Fiona go back to their swamp to raise their family of three (ugly!) baby ogres.

This brings us to “Shrek Forever After”!  What began as the ideal life,has grown monotonous. Waking up, farting babies, working, sleeping,etc…it all takes its toll! Poor Shrek has grown dissatisfied with his life, and longs for the days when he was the town’s feared ogre.

The fact is, the townspeople have grown to love Shrek. Instead of being the feared monster he remembers, he has become something of alocal celebrity – complete with tour buses of people taking snapshotsof his house and family!

At his children’s first birthday party, Shrek’s frustrations come to a boil and he blows up in front of everyone.  A chance encounter with Rumpelstiltskin (very well done by Walt Dohrn) changes everything. Together, they work out a deal to change Shrek back to a scary ogre again for one day. The twist is that Shrek must agree to give up another day in return, and offers any day from his childhood that he doesn’t remember. Poor Shrek gets swindled out of the day he was born, and runs the risk of being erased from existence!

In Shrek’s “alternate day universe”, Shrek is back to his scary self.  Everyone is terrified of him again, and he once more has the run of the town!

Sort of. Shrek’s swamp is now deserted, and Ogres have become an endangered species that are being hunted down by flying witches, and taken to Far Far Away Palace, property that is now owned by Rumpelstiltskin.

We don’t want to spoil all the surprises, but nothing is what it was in Shrek’s real life. He is not married to Fiona, he isn’t friends with Donkey (yet), and Puss in Boots (the highlight of the movie) has becomea morbidly obese cat who lives for feeding time and petting sessions!

Will Shrek be able to save himself, the ogre population, and the town? Will he ever get his life back? What is this “true love’s kiss”anyway, and how do you find it in less than 24 hours?!?

This is the first Shrek movie in 3D, and I liked it. In fact, I think that all the Shrek movies would have been great in 3D. I’ve stated before in some of my other reviews that I really find this tech lends itself better to animated features rather than live action movies. This is true with Shrek as well.

The animation is really good in this film, and the 3D makes the cartoon characters seem more life-like. Even the witches almost looked like real actresses. There aren’t that many pop-out moments in the movie,but that didn’t bother me. The depth was there when the script required it.

I have read that a lot of reviewers didn’t like this movie. Some called it boring and flat – even in 3D. Others have even gone so far as to say that the franchise is played out. I enjoyed the movie, and the 3D was an added element. It didn’t make the movie, but it was a nice touch.

As a final bow from the Shrek franchise, it gets a thumbs up from me!