By NeilFebruary 9, 2011Press Room
No Comments

According to Stereoscopic 3D Consumers, the Modest Depth-only 3D Experience in Movies has no Place in Most 3D Video Games.

Toronto, Ontario (February 7, 2010) – The S-3D Gaming Alliance has just released the 2011 edition of The U-Decide Initiative.  U-Decide is credited as the only S-3D gaming report shaped by consumer opinion, industry analysis, and hands-on experience.  U-Decide gives readers a candid outlook of what needs to happen to make stereoscopic 3D gaming successful in the long term.

“DDD is a leading provider of 3D game conversion software for the PC market, and our success is dependent on delivering what gamers want.  The U-Decide report provides this helpful insight and more, and we recommend it to anyone that also markets to the growing S-3D gaming community,” said Chris Yewdall, CEO of Dynamic Digital Depth. 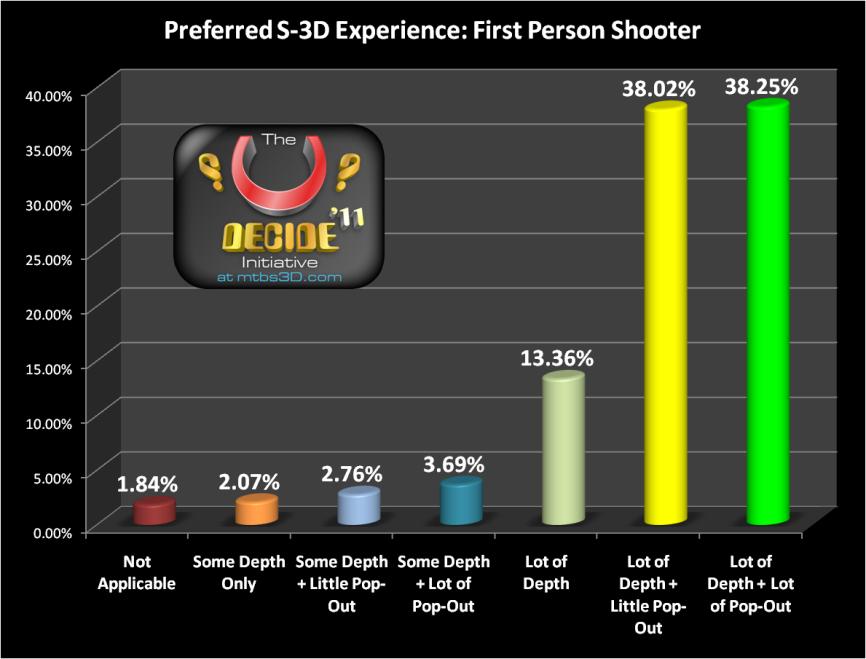 Eight distinct game classes were analyzed, each with its own unique stereoscopic 3D visual characteristic expectations

“U-Decide encouraged us to rethink what it means to have a good 3D gaming experience and demonstrated that 3D film and games have little in common.  Developers releasing titles based on modest 3D movie experiences should throw the rulebook out and keep their options open,” said Neil Schneider, Executive Director of The S-3D Gaming Alliance.

The full report is available to new and existing S-3D Gaming Alliance corporate members at deeply discounted rates or for free depending on current tier level.  Visit http://www.S3DGA.com for membership and report details.

“U-Decide results demonstrate a growing consumer demand for stereoscopic 3D gaming experiences.  To meet the needs and expectations of customers, formalizing quality standards needs discussion and ratification by game developers and technology enablers alike. There are clear benefits for developers to participate and engage in that discussion,” said Alan Price, S3DGA’s quality expectations steering team lead.  In addition to being an interactive media entrepreneur, Mr. Price served as CTO of Electronic Arts Canada for five years.

The S-3D Gaming Alliance is the official voice and standards body for stereoscopic 3D gaming.  As a non-profit organization, S3DGA provides for standards discussions, consumer promotion, education, and awareness. Its membership is comprised of organizations and individuals with an interest in developing S-3D hardware and software solutions. Visit http://www.s3dga.com for more information about the alliance and its upcoming meetings.