Toronto, Ontario (December 23rd, 2010) – The U-Decide Initiative is an industry wide effort to survey console and PC gamers to determine what customers want, which gaming experiences will ultimately sell, and what the near future buying patterns will be.  U-Decide 2010 was made possible by The S-3D Gaming Alliance (S3DGA), Panasonic, Electronic Arts, Ubisoft, Steelseries, Zalman, Blitz Games Studios, Computer Power User, and Meant to be Seen.

According to the Entertainment Software Association, over 50 percent of adults play video games. The U-Decide Initiative provides a tight focus on this influential consumer market.

“While gamer interest is high, 3D displays are regularly criticized as being too expensive or out of reach in today’s economy.  Reviewing current holiday sales pricing compared to what gamers have told us, the HDTV makers got it right this season,” says Neil Schneider, Executive Director of The S-3D Gaming Alliance.

U-Decide 2010 had nearly 1,200 respondents: 735 traditional non-stereoscopic gamers that don’t yet own 3D equipment (only 2D), and 434 experienced stereoscopic 3D gamers that do. These preliminary results are 100% based on the 2D group to prevent skewing. 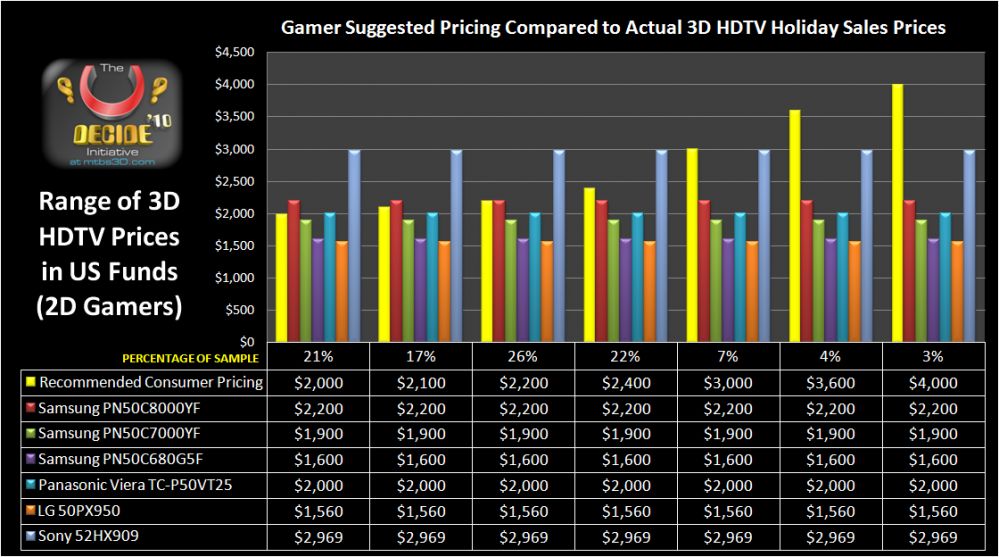 The above table is a cross reference of the pricing 2D gamers are willing to pay for a 50” 1080P 3D HDTV at different premium levels, and the actual sales prices of qualified models during the peak of the 2010 holiday season.  The price indicated for each 3D HDTV, includes two pairs of branded 3D glasses.  These rates are all subject to change according to retailer and manufacturer, and are for reference purposes only.

The chart is read as follows: the first row labeled “Consumer Recommended Pricing” is how much consumers are willing to spend on a 3D HDTV based on U-Decide’s results.  It’s broken down into tiers ($2000, $2100, $2200, etc.).  The percentage on top of each pricing tier is the portion of 2D gamers that are willing to spend at that level.  Each row that follows is the best sales price for currently available 3D HDTVs by leading manufacturers for comparison purposes.

The Sony 52” 52HX909 is a bit larger than the other units mentioned, and have been known to offer additional bundling advantages for the gaming market.  Its pricing is listed for completeness.

“This cross-reference is strictly focused on price.  Not all 3D HDTVs are born equal, so consumers will likely spend more for image quality, content bundling, and brand recognition.  When you figure that 3D HDTVs are inherently the best 2D televisions as well, it’s all win-win for the consumer,” says Schneider.

Holiday and post-holiday bargain hunters are encouraged to visit mtbs3D.com for a no-nonsense buying guide for modern 3D displays, software, and equipment for PC and console gaming.

Game developers and companies interested in helping shape the future of stereoscopic 3D gaming please visit http://www.S3DGA.com for membership details. Preliminary U-Decide Initiative findings can be found at http://www.mtbs3D.com under the U-Decide tab.  Learn more at Meant to be Seen and The S-3D Gaming Alliance websites.

To schedule an interview or meeting with Neil Schneider at the upcoming (CES) Consumer Electronics Show, please contact: